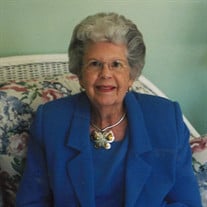 A memorial service for Rita Bryant Turner, Ed.D., will be held Monday, May 3, 2021, at 10 a.m. at Green Acres Baptist Church Chapel with Dr. Darryle Dunks officiating. Burial in Oakwood Cemetery, Jefferson, Texas, will precede the service. Visitation will follow the service. Rita was born April 13, 1928 in Alexandria, Louisiana, to Willie Clarence and Minnie Ferrell Storie. She went to her heavenly home April 27, 2021. Because her father was an oil field worker, the family lived briefly in East Texas during the oil boom. In 1933 they moved to Mentone in Loving County. Rita delighted in telling that it is now the least-inhabited county in “the lower 48” and the only Texas county without a school. From 1938 until their move to Marion County in 1943, the family lived in Wichita County. In 1944 she graduated from Jefferson High School at the top of her class. She received a B. S. degree from East Texas Baptist College (now ETBU) in 1948, M.Ed. From East Texas State College (now Texas A & M, Commerce) in 1953, and Ed.D. from (now) University of North Texas in 1975. Her career was in education. She taught at Waskom High School and in elementary schools in Marshall and Tyler. During summers, she taught at the University of Tennessee, Pan American University, and in a Harvard graduate program. She was an elementary consultant for Tyler ISD for six years and was the first white supervisor in the Black schools. She organized the system’s media program. While an instructor at East Texas State (1967-72), Rita led in establishing the first reading conference. She also developed a program that was credited as the basis for the teacher-aide program in Texas schools. She said that she belonged to every professional organization and helped organize others. She was Pres. of the TX Assn. for Supervision and Curriculum Development and a founding member of the TX. Assn. of the Gifted. Her summer camps for gifted learners were a first in the state. For three years she worked with Partners in Career Ed to develop a state plan for vocational education. Her career-ed dissertation was cited as the best in the nation by the NEA, and the US Office of Education commissioned her to survey all career-ed programs in the country. When the campus for TX Eastern University opened in 1976, Rita joined the faculty. After a name change, the school became The University of Texas at Tyler. In 1988 she retired from there as a Professor of Education. Rita accepted Christ as a child. She attended Tyler’s First Baptist Church (1957-67) and later Green Acres Baptist Church where she was the projects chairman of the Care and Share Class for twenty-five years. Recently she belonged to the Dorcas Class. She also attended services at Marvin Methodist Church and belonged to the Guild Circle. Rita was preceded in death by her parents, husband Austin P. Turner, ex-husband Don C. Bryant, brother Harold Storie, and sister-in-law Edith Storie. She is survived by her daughter Donna Kay “Katie” Bryant of Cimarron, NM; her brother John Storie of Bentonville, AR; her niece, Ann Karro (Dennis) of Seattle, WA; and grandchildren-by-choice: Jennifer and Mark Dickson of Tyler and Bradley and Stefani Newberry and their sons of Dallas. In recent years, loving support was provided by wonderful friends Vickie Johnson, Mavita Markle, Dr. Beverly Rodgers, and many others. Though she loved flowers, Rita’s preference for memorials, for those who might wish to do so, would be gifts to her favorite causes, Meals on Wheels and The Salvation Army. For anyone attending the service, masks are encouraged.

The family of Dr. Rita Bryant Turner created this Life Tributes page to make it easy to share your memories.

A memorial service for Rita Bryant Turner, Ed.D., will be held...