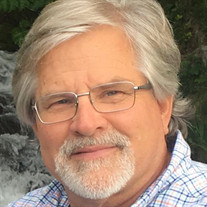 After a five-month battle with pancreatic cancer, Robert G. Randall Jr. went to be with the Lord on Monday, December 13, 2021. Bob was born in Shreveport, Louisiana, to Robert G. and Mary W. Randall on August 16, 1959. The family moved to the Tyler area in 1972, where he remained for the rest of his life. A loving father, husband, brother, son, and friend, Bob was the owner of Lone Star Concrete in Tyler for the last several years and, before that, spent 30 years as a home builder in the Tyler area. His understanding of the construction industry and his love for doing his job well and treating his customers right distinguished him and made him successful in his career. Bob was a man who loved his family and his friends dearly. He never met a stranger and could be counted upon to help others whenever the opportunity arose. His positive approach to life and to be a friend to those around him made him special. Whether it was a customer who needed concrete in a hurry or an employee facing hardship, Bob was always willing to listen and help. The greatest job of his life was his family. He married his lovely and devoted wife, Gail, in 1998 and a first-time father to his daughter, Riley, in 2000. The father-daughter bond they shared defined the remainder of his life. Riley is a Junior at Baylor University and is an excellent source of pride for her mom and dad. Bob, Gail, Riley, and his stepson, Spencer, made their home in Gresham across the road from the house where Bob and his siblings, Suzanne, Stephanie, and Mark, grew up. Their parents, Bob and Mary Randall, created a loving, nurturing home for their family filled with years of happy memories for Bob and his brother and sisters. Over the past few months, Bob has faced many complex health challenges. The family would like to thank the doctors who treated him and, more importantly, the friends and family who supported him through this difficult time. His wife Gail gave all her love and support to Bob during this time. Her efforts with him to fight as hard as they could were a testament to their love for one another. Bob was preceded in death by his parents Bob and Mary Randall. He is survived by his wife, Gail Randall; his daughter, Riley Randall; stepson, Spencer Adams; his sister, Suzanne Elder; his sister, Stephanie Rumbelow and husband Bruno; his brother, Mark Randall and wife Ashley; his brother-in-law James Hedgecock and numerous nieces and nephews. Bob will be laid to rest near his parents in Tyler. The family will hold a visitation on Friday, December 17, from 6:00 to 8:00 p.m. at Stewart Family Funeral Home in Tyler. Services will be held on Saturday at 2:00 p.m. at First Christian Church in Tyler. As Bob’s heart was open and welcoming to others, so are the services, as a very good man’s life is celebrated. May he rest in peace with the knowledge that he was loved by his maker, his family, and his friends.

After a five-month battle with pancreatic cancer, Robert G. Randall Jr. went to be with the Lord on Monday, December 13, 2021. Bob was born in Shreveport, Louisiana, to Robert G. and Mary W. Randall on August 16, 1959. The family moved to... View Obituary & Service Information

The family of Robert (Bob) G. Randall Jr. created this Life Tributes page to make it easy to share your memories.

After a five-month battle with pancreatic cancer, Robert G. Randall...