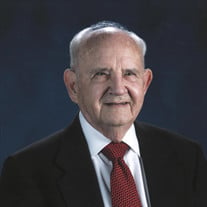 Robert E. Rossman, MD, greeted his Lord and Savior with open arms on Wednesday, July 28, 2021. Bob was born on February 18, 1927 to Lloyd and Agnes Rossman in Franklin, PA. He was a devoted husband to Mary Longman Rossman and a wonderful, loving father to six children. Bob was known for his quiet nature, immense knowledge of the bible, his gentle touch as a physician, and his love for music (specifically his trumpet and the Tyler Big Band.) Bob graduated from Thomas Jefferson High School in Port Arthur, TX in 1944. He began his undergraduate studies at the University of Texas only to spend his 18th birthday on a troop train headed to San Diego, CA for Naval training. Shortly thereafter, he spent the rest of his training as an operating room technician in Key West, FL. Bob shared with many that this time proved to be most helpful as he “grew up!” Bob returned to Austin for the 1946 fall semester with a whole new attitude concerning his studies and entered UTMB Galveston in the fall of 1949. With his focus on studying, his ‘free’ time was limited to a dance band, which helped fund his pre-med studies. On numerous occasions, Bob told his children and grandchildren how he vividly recalled praying many times for God’s provision for a wife. Genesis 2:22 clearly states that “He brought her to him.” Bob’s intense study program kept him too busy to look for his wife. His requests to God stressed for Him to let Bob know when that “special love” would show up … and it happened just that way! Bob later proposed to Mary in San Antonio following a Port Arthur HS football game. Bob shared with Mary his greatest desire was to change the first four letter of her name from Longman to Rossman and Mary graciously agreed! Having graduated from UTMB Galveston in June 1953, Bob and their growing family spent his internship at Oklahoma University. He later became a General Practitioner in Alto, TX from 1954 – 1960 where Bob was President of the Cherokee County Medical Society. From 1960-1963, Bob and family lived in Houston where he completed his Dermatology Residency at Baylor College of Medicine, graduating with his M.S. in Dermatology. In 1963, he began his practice as a Board-Certified Dermatologist in Tyler, TX. Bob served as Vice President of the Texas Dermatology Society and as the editor of The Texas Dermatologist. He was a past president of the Smith County Medical Society, as well as past president of the 11th Medical District of Texas Medical Society and a member of the Bethesda Clinic St Luke Society. Bob retired from Dermatology in August 2014 to spend life on the farm and be with his wife, Mary. Throughout Bob’s journey on earth, he lived a simple yet unbelievably full life! He and Mary traveled the world where they stood by the Sea of Galilee and watched the sunrise. They stood in the center of the Coliseum in Ephesus, Turkey as “How Great Thou Art” was sung. Bob was a gardener and for many years kept friends and family well fed with the bounty grown on his farm. Another huge part of Bob’s life was The Tyler Big Band in which he played the trumpet. Friends and family came from all around to see Bob play the horn! Bob played a large part of the Lay Witness Ministries where he helped share the Word and love of the Lord. Bob was truly a biblical scholar. Often friends, family and acquaintances would reach out to him for his scriptural knowledge and understanding. Bob was an avid reader, as seen through the many daily devotionals, biblical records, and books he collected. Bob devoted decades to his service to the Lord through the many bible studies he led, his active involvement with men’s BSF, Share Group and “Choir Practice”. For those who truly knew Bob, the minute he raised his pointer finger, a hush would fall around the room, awaiting the wise words he was about to share … everyone listened, admired and loved this most genuine man. His was a Godly life well lived. As witnessed by many, Bob lived life to the fullest and had a sincere and deep love for his Lord and all His goodness. Bob is survived by his children Mike Rossman and wife Pam, Georgetown, TX; Bryan Rossman and wife Susan, Tyler, TX; Cindy Harper and husband John, Tyler, TX; daughter-in-law Pam Rossman, Plano, TX; Kathy Epperson and husband Daryl, Houston, TX; Wes Rossman and wife Angi, Tyler, TX. Bob is also survived by sister Doris Parsons, husband Henry and his nieces and nephews. He is also adored and remembered by his fourteen grandchildren: Thomas Harper, LeighAnne Allen, MaryAnna Rashti, Lauren Collins, Ross Rossman, Bryan “Bear” Rossman Jr., Taylor Hagler, Ally Neill, Will Epperson, Caitlyn Epperson, Stephen Rossman, Christian Rossman, Meagan Rossman, and Cameron Eastman. Bob’s legacy continues on as well with twelve great-grandchildren. Bob is preceded in death by his beloved wife, Mary E. Rossman, son Mark A. Rossman, daughter-in-law Cynthia Rossman, granddaughter Kelli Anne Harper and sister Beverly Jean Rossman Fontenot. In lieu of flowers, memorials may be given in Bob’s memory to Bethesda Clinic (www.bethesdaclinic.org) 409 W. Ferguson Street, Tyler, TX 75702, 903.596.8353), Gideons International (www.gideons.org), or Hospice of East Texas (www.hospiceofeasttexas.org) 4111 University Blvd, Tyler, TX 75701, 903.266.3400) Visitation with the Rossman family will be held, Saturday, July 31st at 5 -7 pm at Stewart Family Funeral Home, 7525 Old Jacksonville Road, Tyler, TX 75703. The memorial service will be held on Sunday afternoon at 2 pm at Grace Community Church, 3215 Old Jacksonville Road, Tyler, 75701 with a private family burial.

Robert E. Rossman, MD, greeted his Lord and Savior with open arms on Wednesday, July 28, 2021. Bob was born on February 18, 1927 to Lloyd and Agnes Rossman in Franklin, PA. He was a devoted husband to Mary Longman Rossman and a wonderful,... View Obituary & Service Information

The family of Robert "Bob" E. Rossman M.D. created this Life Tributes page to make it easy to share your memories.

Send flowers to the Rossman family.