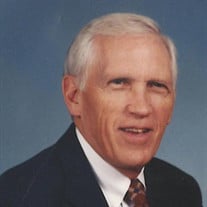 Graveside services for Robert Franklin “Bob” Craig, 94, of Tyler will be held on Wednesday, June 1, 2022, at 2:00 p.m. at Cathedral in the Pines Cemetery in Tyler with Pastor Kevin Burdette officiating under the direction of Stewart Family Funeral Home. Mr. Craig passed away Saturday, May 28, 2022, in Tyler. He was born September 22, 1927, in Manzanola, CO to Robert D. and Sylvia Susan Craig. Bob attended high school in Victor CO, graduating as valedictorian of a large senior class of 16. Bob joined Army Corps of Engineers at Fort Leonard Wood in 1945. He was assigned to the 343rd H/S Engineering Regiment in Ziegenberg, Germany. He attended Colorado A&M after being discharged in 1947, graduating with an Electrical Engineering degree in 1951. Bob joined the Gasoline Department of Phillips Petroleum in Phillips, TX. Bob married Patsy Bybee on February 7, 1953, and they have three sons, Michael, Mark, and James. In 1957, he transferred to the Plastics Technical Services Center in Bartlesville, OK. While there he was involved in development and startup of many plastics applications - from hula hoops to ocean cables to 150 mm binary nerve gas canisters. After retiring as Technical Services Director in 1986, Bob moved to Tyler, TX. He continued consulting in plastics applications and was teacher and director at a plastics program at Tyler Junior College. In 1988, he joined H&R Block and stayed with them for 19 years. Bob enjoyed golf at Peach Tree Oak Hurst Golf courses and being active in Green Acres Baptist Church. Bob was preceded in death by his parents, two sisters, Dorothy Craig and Phyllis Wandry, and one brother, Ronald Rodgers. He is survived by his loving family including his wife of 69 years, Patsy; three sons and their wives, Mike and Coni of Osprey, FL, Mark and Linda of Dallas, and James and Jacquie of Houston; two granddaughters, Chandler and Rob Baker, and Nikki Craig of Austin; and two great-grandchildren, Elliott and Colin Baker of Austin. In lieu of flowers, donations may be made to the Wounded Warrior Project, Attn: Donor Services, 7020 AC Skinner Parkway, Suite 100, Jacksonville, FL 32256. (https://woundedwarriorproject.org).

Graveside services for Robert Franklin &#8220;Bob&#8221; Craig, 94, of Tyler will be held on Wednesday, June 1, 2022, at 2:00 p.m. at Cathedral in the Pines Cemetery in Tyler with Pastor Kevin Burdette officiating under the direction of Stewart... View Obituary & Service Information

The family of Robert "Bob" Craig created this Life Tributes page to make it easy to share your memories.

Send flowers to the Craig family.