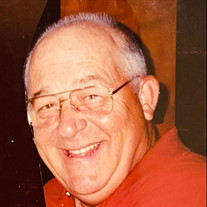 Robert Hamilton passed away Saturday, December 26, 2020 in Tyler. He was born August 29, 1937 in Houston, Texas to Robert Spence and Vestajane Scoggins Hamilton. Robert “Bob” was a Christian of the Catholic faith. He graduated from Tyler High School, Class of 1956, where he was a member of the golf team. He then went on to graduate from North Texas State University. Bob was a co-owner of Electra Sales of North Texas-Dallas, a Mfg. Rep Agency in the electrical business with Robert Saunders. Bob’s smile and laugh, not to mention the “occasional” email, kept all that knew him laughing along. He enjoyed traveling with Carolyn, along with golfing, fishing and spending time with family and friends whenever possible. He was preceded in death by his mother and father. Survived by his loving family including his wife of 62 years, Carolyn Sebring Hamilton; three children, Kelli G’Sell (David) of Tyler, Willie Hamilton (Carrie) of McKinney, and Becky Wands (Rob) of Farmers Branch; five grandchildren, Ellen Hamilton Faglie (Drew), Dallas G’Sell, Corey Wands, Kati Wands, Maggie Hamilton; two great-grandchildren, Kynslee and Weston Faglie; brothers, T.C. Hamilton (Sally), Bigfork, Mt. and Jack Hamilton (Janna), Phoenix, Az; sister-in-law, Phyllis (Rusty) Horn, Austin, Tx; and numerous nieces and nephews. Special thanks to all the wonderful caregivers he has had over the past few months, and to God’s Angels who take the form of doctors and nurses at The Hospice East Texas. Our sincere thanks to Dr. James Stanford, Wendy, Dawn and especially Esperanza, words cannot express our gratitude for your loving care in the final weeks. The family would appreciate any memorial contributions be made to The Hospice of East Texas in Bob’s name, 4111 University Blvd.Tyler, TX 75701, or Texas Kidney Foundation at https://txkidney.org/donate or a charity of your choice.

Robert Hamilton passed away Saturday, December 26, 2020 in Tyler. He was born August 29, 1937 in Houston, Texas to Robert Spence and Vestajane Scoggins Hamilton. Robert &#8220;Bob&#8221; was a Christian of the Catholic faith. He graduated... View Obituary & Service Information

The family of Robert Spence Hamilton II created this Life Tributes page to make it easy to share your memories.

Send flowers to the Hamilton family.