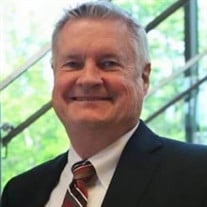 Robert “Bob” Bradford Henderson, III, passed away due to complications from cancer on April 23, 2020 with his immediate family at his side at Christus Mother Frances Hospital. Bob was born on July 21, 1949, in Long Beach, California, to Robert Bradford Henderson, Jr. and Velma O’Neal Henderson. After graduating with a Bachelor of Science degree in Business-Finance from California State University at Long Beach in 1972, Bob entered the United States Naval Air Reserves and continued to serve in that capacity for six years. It was on September 10, 1972, that he married Cheri Louise Maddox Henderson. Over the course of the next 30 years, he held leadership positions in California, Texas and Louisiana before returning to Texas. He was President of Old Glory Insurance Company, a business of Heartland Security Insurance Group, in Tyler, Texas, for the past 17 years and was loved by all he encountered. Bob lived a life that exemplified Jesus, his Lord and Savior. He was a devout Christian and dedicated husband, father, and “Bob-Bob.” Bob is survived by his loving wife of 47 years, Cheri; their three daughters and husbands, Alexis and Jason Isham, Jessica and Billy Spencer, and Emily and Jason Niederkorn; their six grandsons, Hayden and Luke Isham, Zachary Henderson-Spencer, and Jack, Drew and Kyle Niederkorn; and his sister, Jean (Henderson) Glover. The immediate family will have a private service to honor his life. Interment will be at Rose Lawn Cemetery. Arrangements are under the direction of Stewart Family Funeral Home on Old Jacksonville Hwy. in Tyler. Friends and family may visit Stewart Family Funeral Home between April 27 and May 1 to sign Bob’s memorial book.

Robert &#8220;Bob&#8221; Bradford Henderson, III, passed away due to complications from cancer on April 23, 2020 with his immediate family at his side at Christus Mother Frances Hospital. Bob was born on July 21, 1949, in Long Beach, California,... View Obituary & Service Information

The family of Robert Bradford Henderson III created this Life Tributes page to make it easy to share your memories.

Robert “Bob” Bradford Henderson, III, passed away due to complications...

Send flowers to the Henderson family.