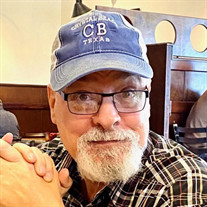 Memorial services for Robert Edgar Johnson, Jr., 64, of Tyler Texas will be held on Tuesday, August 31, 2021 at 2:00 pm at Stewart Funeral Home with Jim Gee officiating. Bob passed away Wednesday, August 25, 2021 in Tyler. He was born March 17, 1957 in Roswell, New Mexico to Robert Edgar Johnson Sr. and Bertha Louise Johnson. He was preceded in death by his sister, Sue Johnson. He is survived by his wife, Shannon Spencer Johnson of 27 years; his in-laws, Charles and Martha Lee of Tyler and Leon Spencer of Athens, Texas. He had wonderful children; Carly Mayo and her husband, Ben Mayo of Raleigh North Carolina; Tara Johnson and Eli Johnson of Tyler Texas. He was also survived by his sister, Patricia Scussel and her husband, Bob from Colorado Springs, Colorado; sister Kerry Brown and her husband, Mike of Cypress, Texas; and sister Bobbie Castanon and husband, Al from Tyler, Texas. He had many loving nieces and nephews. Bob had been in the healthcare profession for many years as a Registered Nurse and Nurse Practitioner with UTHET. He was a member of Redeeming Grace Fellowship. Bob Johnson was a family man. Yes, he was a wonderful husband and father to his wife Shannon and kids and a mischievous little brother to his sisters, but more than that, he brought a sense of family wherever he went. He knew what each person needed: a dad, a brother, a friend, a wise counselor, or just a listening ear. He had a knack for making you feel like you've known him for years even if you had just met him. He knew what he wanted from life and how to enjoy it, whether it be trips with his "bride" Shannon, or sitting back in his recliner watching kids open the Christmas presents. Bob was also known for his famous "Hugs" where ever he went. His sentimentality and love for family traditions brought everyone together. Although his passing was sudden and unexpected, it was peaceful. He was surrounded by family, and while his wife said goodbye to him on this side of eternity, he said "hello" to his Mom and Dad and his eldest sister Sue and his beloved Jesus on the other. If desired, memorials may be made to Nicholas Pet Haven, 12903 Hwy 155, Tyler, Texas, 75703 (www.nokillnetwork.org); SPCA, P.O. Box 132899, Tyler, Texas 75713 (www.spcaeasttx.com); Texas Parks and Wildlife, 3330 SSW Loop 323, Tyler, Texas 75701 (www.tpwd.texas.gov) or the charity of your choice.

The family of Robert Edgar Johnson Jr. created this Life Tributes page to make it easy to share your memories.

Send flowers to the Johnson family.