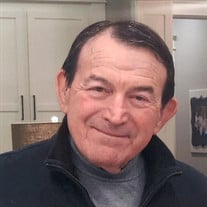 Robert “Glenn” Woodard, age 77, died peacefully on February 10, 2022 in Tyler, Texas. Glenn was born January 29, 1945 in Blountsville, Alabama and is preceded in death by his loving parents, Claude and Eugenia Woodard, brother, Danny Woodard and grandparents, all of Oneonta, Alabama. Mr. Woodard is survived by his beloved wife of fifty-five years, Dana McLean Woodard, his daughter, Katie and son-in-law Reese Stokes, grandsons Jackson, Samuel and Greyson Stokes of Tyler, son, Eric Woodard and granddaughter, Cora Woodard of Tyler, niece, Dana and husband Steve Bryant, and sister-in-law Cheryl Woodard all of Alabama. Glenn graduated from Auburn University, where he was a member of Sigma Pi Fraternity. He received a doctorate of jurisprudence, Magna Cum Laude, from the Cumberland School of Law at Samford University, Birmingham. He practiced law in Alabama shortly before starting a career with Trane Company as General Counsel/Vice President Marketing of North America, taking his family to Wisconsin, California and Texas. He later founded Western Air Systems & Controls, an independent Trane distributorship, with offices throughout California and Nevada. Mr. Woodard was a member of the State Bar of Texas, State Bar of Alabama, State Bar of Wisconsin and State Bar of California. He was a member of the Cathedral of the Immaculate Conception in Tyler, a member of the Texas & Southwestern Cattle Raisers Association, and International Brangus Breeders Association. Glenn was a devoted husband, father and grandfather, spending his retirement years surrounded by his family and enjoyed traveling the globe, hunting throughout North America and Africa, and working cattle on his ranch in East Texas. Rosary is scheduled from 6:00-7:00 pm on Thursday, February 17, 2022 at Stewart Family Funeral Home, 7525 Old Jacksonville Highway in Tyler. A funeral service will be held on Friday, February 18th, 2022 at the Cathedral of the Immaculate Conception, 423 S. Broadway Ave, Tyler at 10 am followed by graveside services at Rose Hill Cemetery. The family wishes to thank all of the dedicated doctors, nurses and staff at Christus Mother Frances Hospital, UTHealth Tyler, and Hospice of East Texas. In lieu of flowers, memorials may be made to Hospice of East Texas.

The family of Robert "Glenn" Woodard created this Life Tributes page to make it easy to share your memories.

Send flowers to the Woodard family.