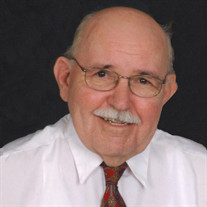 My ever loving, ever forgiving, adorable, dimpled, soul mate has gone on to be with his heavenly Father and his family and friends who have gone before him. Roger knew no strangers, always had a smile and handshake for everyone he met. His funny stories, his quirks, (not watching Green Bay play, he might jinx the game), his warm friendly smile, twinkle in his eyes were great comforts for many an AA’er during Roger’s 42 years of sobriety. He will be missed but not forgotten by everyone who knew him. A memorial service for Roger Keith Balzer, 85, of Whitehouse will be held on Saturday, January 16, 2021 at 2:00 p.m. at Stewart Family Funeral Home in Tyler with Pastor Matt Rose officiating. Roger passed away Saturday, January 2, 2021 in Tyler. He was born January 23, 1935 in LaCrosse, WI to Edward P. and Myrtle (Olson) Balzer. Roger was a member of Trinity Lutheran Church and The Alpha Group of Tyler. He enjoyed hunting and fishing with his father and brothers growing up. He graduated from Central High School and a 2 year technical school in LaCrosse. After graduating he joined the United States Air Force and was stationed in Greenland and Othello, WA. Upon returning home, he worked at Allis-Chalmers for a few years and then joined the Trane Company in LaCrosse. Roger retired in March of 2000 from the IT department after working 30 years for Trane, starting in LaCrosse, then Clarksville, TN and finally Tyler. Roger was preceded in death by his parents, Edward and Myrtle Balzer, and his brothers, Richard and Edward and Edward’s wife, Marjorie Balzer. He is survived by his loving family including wife, Joyce (Rothle-Rose) Balzer; adopted son, Martin Balzer of Livermore, CA, and Martin’s 2 sons, Martin, Jr. of Livermore, CA and Brian Balzer of LaCrosse, WI; stepsons, Michael Rose and wife Debbie of Texarkana, AR, their sons, Matt and wife Hanna of Joplin, MO, and their children, Lukas and Mikah, and Andy Rose and wife, Emily of Seattle, WA, and their daughter, Elanor, and Matthew Newton of Dallas; and David Rose of Mixon, and his children, Ashley Rose Alexander and children, Seth, Aden and Cole, Casey Rose of Elysian Fields, Gregory Rose of Troup, and son, Lukas, and Chelsea Rose of Houston; and many more nieces and nephews, aunts and uncles spread all over the country. If desired, in lieu of flowers, you can make Memorial Gifts in Roger’s name to the following organizations: East Texas AA Central Service Office, Paluxy Square, Bld. 4, Suite 401, Tyler, TX 75703; The Pie Ladies, c/o Trinity Lutheran Church, 2001 Hunter Street, Tyler, TX 75703.

My ever loving, ever forgiving, adorable, dimpled, soul mate has gone on to be with his heavenly Father and his family and friends who have gone before him. Roger knew no strangers, always had a smile and handshake for everyone he met. His... View Obituary & Service Information

The family of Roger Keith Balzer created this Life Tributes page to make it easy to share your memories.

My ever loving, ever forgiving, adorable, dimpled, soul mate...

Send flowers to the Balzer family.