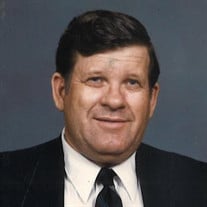 Services for Roger Ponder of Tyler, 85, will be held on Thursday, October 1, 2020 at Stewart Funeral Home, 7525 Old Jacksonville Hwy in Tyler at 2:00 p.m. with Rev. Sam DeVille, pastor of Flint Baptist Church, officiating. Visitation will be from 1:00 until funeral time. Burial will be following the service at Bascom Cemetery, FM 848 in Tyler. Roger passed away from complications of respiratory illness, Alzheimer's and other medical conditions. Roger was a great man. No, you never saw his name in the newspaper or on TV, but God knew him well. He was born in the rural area of San Augustine, Texas. About the age of 14, his mother left the family, and Roger, as the oldest child, had to quit school in the 9th grade to care for 3 younger brothers, one of whom was an invalid, and two baby sisters, both in diapers and on bottles, while his father worked to support the family. Roger cooked, washed, and faithfully attended the boys, the babies and his invalid brother, who two years later died in Roger's presence. At age 17, during the Korean War, Roger entered the Air Force, finished school there, and soon became a leader of several men working on F-80 and F-86 fighter bombers and helicopters. He was in charge of airframe and plastic fabrication for twelve B-29 bombers being converted to re-fuel jet planes in the air. The planes didn't leave the ground unless Roger signed them off. He did his job faithfully and was an asset to his squadron. Roger was first married to Billie Faye Ponder but later divorced. He lost his oldest son, Ricky, who was 13, in an accident and it was that event that brought him to his knees, taking Jesus as his Lord and Savior. His life totally changed after that. When they married in 1970, Roger and Ann combined their families and together they dutifully raised their 5 children, bringing them up spiritually and with strong work ethics. When Ann's son, Andy Brown, was killed in a car wreck in 2008, they raised their grandson, Matt Brown. Roger was always a hard worker and a strong disciplinarian. For years he had a body shop, then an appliance business. He and Ann both "retired" in 1995 and immediately began work remodeling a building and opening South Park Hair Salon. They had rental properties and after several years sold the salon and other properties and, at the age of 70, purchased a small, raw tract of land southeast of Bullard and started a subdivision. This was no easy task; weeds and scrub trees covered the 17 acres and Roger purchased an "old" tractor and started mowing. They did all the paperwork themselves and got permission from Cherokee County as the first subdivision to be built under their new rules. They then built the road into the subdivision, divided it into lots and built three of the homes there in Hidden Acres Subdivision. Everything in the subdivision was sold by their age of 78. Roger and Ann served as Sunday School teachers for many years at Southern Oaks Baptist Church and Pleasant Hill Baptist. They then were members at Friendly Baptist Church in Tyler and currently belong to Flint Baptist Church. Roger was a Gideon and spoke in various churches and distributed Bibles to schools and hospitals over the course of many years. He made foreign mission trips to Jamaica and two to Latvia and was a bold one-on-one witness to all he met. He will always be remembered for witnessing every time he hired yard workers and Ann once remarked that he paid people to listen to him tell about Jesus! Roger was predeceased by his parents, Woodrow and Wilna Ponder (Ferguson); his son, Richard Wayne Ponder; step-son, Andy Brown; grandson, Cameron Chapman; as well as his brother, Gerald Ponder and half-brother, Billy Paul Ponder. He is survived by his loving wife, Ann Ponder; children: Debbie Chapman of Tyler, Gary Ponder of Overton, Larry Ponder (Nelda) of Kilgore and Susan Riddle (Jerry) of Mixon; grandchildren: Heath Ponder (Tiffany) of Athens, Jennifer Revis of Alabama, Stacy Ponder of Tyler, Mischa Dacus (Matthew) of Hawkins, Travis Riddle (Samantha) of Jacksonville, Lindy Riddle, Hanna Riddle Renteria (Ryan), Arlen Riddle, and Matt Brown, all of Tyler; great-grandchildren: Emori, Hadlie and Grace Ponder, Destiny Chapman, Lynli Dacus, Brooke, Leah, Kaylee, Monroe, Ledger, Vaughan, Ellington, Harlow, and Revere Riddle; as well as Jackson and Dean Renteria; Ayden Riddle, Lawson Dunklin, and Taylor Revis; siblings: Leo Ponder (Lynette) of Tyler, Mike Ponder (Lawanda) of Jonesboro, Louisiana, Ann Carenza (James) of Lufkin, and Linda Griffin (Bobby) of Lindale; half-brothers and sisters: Teresa Havard, Donna Ponder, Marilyn Willis and Kay Welch of Jonesboro, Louisiana; and James (Buster) Ferguson of Tyler and Janice Perry of Bryan. Pallbearers will be family members and Gideons will be honorary pallbearers. Remembrances may be made in his name to churches or charities of your choice.

Services for Roger Ponder of Tyler, 85, will be held on Thursday, October 1, 2020 at Stewart Funeral Home, 7525 Old Jacksonville Hwy in Tyler at 2:00 p.m. with Rev. Sam DeVille, pastor of Flint Baptist Church, officiating. Visitation will be... View Obituary & Service Information

The family of Roger L. Ponder created this Life Tributes page to make it easy to share your memories.

Services for Roger Ponder of Tyler, 85, will be held on Thursday,...

Send flowers to the Ponder family.