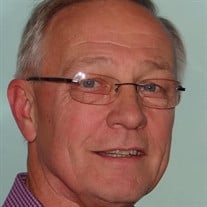 Former, longtime Lawton, Oklahoma resident, Ronald Alan Rulison passed away on May 21, 2020, at the age of 71, after a valiant, hard-fought battle with pancreatic cancer. Ron was born in Monterey, California on December 17, 1948, to Grace and Vernon Rulison. As an Army dependent, he lived in Germany, Georgia, and South Carolina, returning to Lawton to graduate from Eisenhower High School in 1967. He earned his bachelor’s degree from Cameron University and entered the Army with an ROTC Commission in 1971. He completed his master’s degree in human relations from the University of Oklahoma in 1979. He married Sheila Sherrill in 1980, and after serving at Forts Gordon, Huachuca, McLellan, Leavenworth, Bliss, Sill, Korea, and Germany, he retired in 1992 at the rank of Lieutenant Colonel with 21 years of distinguished military service. In July 1993, he became the Senior Army Instructor at MacArthur Senior High School where, for 20 years, he instilled the Army values in JROTC cadets and developed future soldiers and officers of not only the Army and MP Corps, but all branches of service, then retiring in 2013. Many of his students earned their appointments to the United States Military Academy and Air Force Academy. Additionally, both of his sons attended West Point, one of the two becoming a Military Police Corps Officer as well, thus continuing the lineage of the time-honored MP motto, “Of the Troops, For the Troops.” LTC Rulison’s military awards include the Legion of Merit, the Meritorious Service Ribbon with three Oak Leaf Clusters, the Army Commendation Medal, the National Defense Service Medal with Bronze Star, and the Overseas Service Ribbon, and he also earned his Parachutist’s Badge during his service. He is survived by his wife of 40 years; two daughters, Jennifer Beasley and husband Steve and Kimberly Winton and husband Eric; two sons, Brian Rulison, and CPT Blake Rulison and wife CPT Leigh Hackbert; as well as five grandchildren, Rylie Beasley, Brady Beasley, Chase Beasley, Grace Winton, and Vivian Winton; one brother, Clark Rulison; two sisters-in-law, Teresa Sherrill and Lynell Shadid and husband Kyle; and three nephews, Benjamin Sherrill and wife Sunny; Doug Rulison and wife Laurie; and Ryan Rulison.

Former, longtime Lawton, Oklahoma resident, Ronald Alan Rulison passed away on May 21, 2020, at the age of 71, after a valiant, hard-fought battle with pancreatic cancer. Ron was born in Monterey, California on December 17, 1948, to Grace... View Obituary & Service Information

The family of Ronald Alan Rulison created this Life Tributes page to make it easy to share your memories.

Send flowers to the Rulison family.