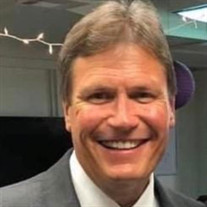 A Celebration of the Life of Jack “Rusty” Russell Hightower, 57, of Tyler will be held on Thursday, June 3, 2021, at 2:00 p.m. at Marvin United Methodist Church in Tyler with Dr. Doug Baker officiating under the direction of Stewart Family Funeral Home. Mr. Hightower made his way home to heaven on Saturday, May 29, 2021, in Tyler, Texas following a lengthy illness. He was born January 15, 1964, in Tyler, Texas to Sue Ann and Dick Hightower. Rusty was a lifelong member of Marvin United Methodist Church and a longtime member of the Trinity Sunday School class. He graduated from Robert E. Lee High School in 1982. He graduated with a Bachelor of Science degree from The University of Texas at Austin in 1986, where he was a member of the Longhorn varsity football team, Kappa Alpha Fraternity, and the UT Silver Spurs. For most of his professional career, Rusty was an Executive in healthcare medical supplies distribution and served as a board member of the Federation of American Hospitals. He served the community in various capacities, including as a member of the Board of the Cystic Fibrosis Foundation, a volunteer for the Hiway 80 Rescue Mission, and a volunteer for the Salvation Army Food Truck Delivery. Rusty was the epitome of a family man. He adored his children and was always present in all of their activities. He is and will be remembered for his unwavering faith, his sense of humor, his charisma and charm, and sincere empathy for others. Rusty was preceded in death by his parents, Sue Ann and Dick Hightower, and his brother-in-law, Son Fulgham. He is survived by his loving family including his children, Zach Hightower and Zach’s wife, Christina, Hannah Hightower and her fiancé, Jarrod McCabe, and Lily Hightower; his sister, Wendy Walker and husband, Cullom; his brother, Patrick Hightower and wife, Sabrina; his nephews, Jack Fulgham and fiancée Lauren Leihgeber, Cullom Walker, IV and wife, Kinnon, and Gill Walker; his nieces, Hallye Reynolds and husband, Bayne, Samantha Fulgham, Gwin Walker, Erin Richter and husband, Lee, Katie Bird and husband Kyle. Honorary pallbearers will be Chris Jones, Ken Townsend, Kevin Thomas, Mike Crawford, Marshall Brown, Greg Fairley, Steve Eargle, Stan Riley, Don Garrett, John Thompson, Tom Steele, Chris Woldert, Scott Knight, Bryan Forman, and Jeff Jenkins. Following the service, the family will receive visitors at a reception in Pirtle Hall. If desired, memorials may be made to Hospice of East Texas, 4111 University Blvd., Tyler, Texas 75701 (https://www.hospiceofeasttexas.org).

A Celebration of the Life of Jack &#8220;Rusty&#8221; Russell Hightower, 57, of Tyler will be held on Thursday, June 3, 2021, at 2:00 p.m. at Marvin United Methodist Church in Tyler with Dr. Doug Baker officiating under the direction of Stewart... View Obituary & Service Information

The family of Rusty Hightower created this Life Tributes page to make it easy to share your memories.

A Celebration of the Life of Jack “Rusty” Russell Hightower,...

Send flowers to the Hightower family.