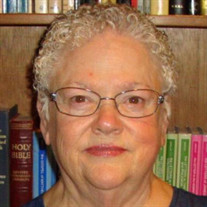 Ruth Thanell Baggett passed to her eternal home with the Lord on November 10, 2021. Thanell was born to this life in Texas City, Texas on May 4, 1950. She was the first child of Naomi and Odell Norris. The family moved to Odessa, Texas when she was in grade school. She grew up there and became the first in her family to graduate from high school finishing from Odessa Permian. As a teenager, she played the organ and piano at Asbury United Methodist Church for her grandfather who led the singing. She became a young, single mother when her daughter Thanet Faith was born in 1971. Thanell worked three jobs to help support herself while attending Odessa College. She graduated with an Associate Degree in Nursing in 1975, and passed her state board exam to become a Registered Nurse. Thanell worked as a surgical nurse at Medical Center Hospital in Odessa. She met Joe in 1975 and they were married on November 21, 1975, at St. Paul’s Presbyterian Church in Odessa where she was the organist. She left full time nursing to become a housewife and mother. She did volunteer private duty nursing for friends who needed specialized care even accompanying patient transport from Odessa to Houston. They moved to Corpus Christi and then to Bryan – College Station, Texas in 1979. She continued her volunteer private duty nursing including a trip with The 700 Club Operation Blessing Flying Hospital medical team. She and Joe were on the founding board of the Brazos Christian School. She was employed as a home health supervisor for seniors receiving assistance and was responsible for home health workers for over fifty patients in nine counties. She became a private music teacher giving piano lessons to children and adults in her home. Music was her gift and first love for expressing herself and she played at several churches as her way to express her faith and to honor God. The family moved to Chandler, Texas. in May, 2008. Thanell applied for retired status as an RN after 40 years to return to being a full time homemaker. She was a faithful, Godly woman knowing God’s love and forgiveness. Thanell read the Bible through each year for several years using a different version each year. She was a strong prayer warrior through daily prayer and as a member of the intercessory prayer team at First Baptist Church in Bryan. Thanell is now reunited with her parents Naomi and “Odie”, daughter Thanet, and sister Ada Diane. She leaves behind others significant to her life: her husband Joe; her stepchildren Jane, Jack, and Joel; her sister Lesta Louan; her aunt Doris Norris; numerous step-grandchildren, step-great-grandchildren, cousins, nieces, and nephews; and her beloved pet cats and puppy dog. Services for Thanell will be held on Monday, November 15, 2021 at 11:00 a.m. at West Lake Baptist Church in Chandler with visitation scheduled one hour prior to service. Entombment will be at Tyler Memorial Park in Tyler.

Ruth Thanell Baggett passed to her eternal home with the Lord on November 10, 2021. Thanell was born to this life in Texas City, Texas on May 4, 1950. She was the first child of Naomi and Odell Norris. The family moved to Odessa, Texas when... View Obituary & Service Information

The family of Ruth Thanell Baggett created this Life Tributes page to make it easy to share your memories.

Ruth Thanell Baggett passed to her eternal home with the Lord...

Send flowers to the Baggett family.