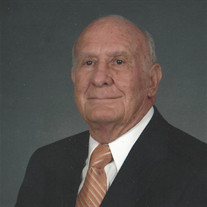 Samuel Erven Colburn passed away on Tuesday, November 26, at the age of 96 in Tyler, Texas, surrounded by his loving wife, Lorene, and family. He was born in Panola County, on December 27, 1922 to Mary Ethel and Samuel David Colburn. He graduated from Carthage High School where he was a member of the high school band. He received a scholarship to Stephen F. Austin University where he played the French horn in the band and was a member of Theta Chi Fraternity. In 1943 he was called to active duty in the United States Army Air Corp. He served his country as a 2nd Lieutenant Navigator/Bombardier during World War II. After the war he returned to college and graduated from Stephen F. Austin State University in 1948 with a Bachelor of Arts and a Master’s Degree. While at college he met his future wife, Lorene Baker, who was selected as a Stephen F. Austin college “Beauty.” He said it took him two years to get a date with her, but she was well worth the wait and the love of his life. They were married on July 1, 1950 and celebrated 70 years of marriage together. His business careers included the oil and gas industry, public education and real estate. He worked as an administrator and teacher for several school districts and retired from Tatum Independent School District. In the oil and gas industry, he worked for Carthage Company, Continental Oil Company and Hudson Oil and Gas. During his career he also served in the United States Air Force Reserves retiring with the rank of Major. Throughout his life, he always put God, country and family first. He was a good husband, father and an example for us. He was a faithful member of the Carthage Church of Christ where he taught bible study classes and served as an Elder. He was a member of the Glenwood Church of Christ at the time of his death. He was active in many community organizations, including; the Lions Club, United Way Fund, Carthage Chamber of Commerce, Carthage Planning and Zoning Board, Maxey Fund, volunteer and leader in the East Texas Area of the Boy Scouts of America. Sam was preceded in death by his parents and his brothers, Hollis Howard Colburn, and Finis Watkins Colburn. He is survived by his beloved wife, Lorene, and three children; son and daughter-in-law, Gary and Debora Colburn of Tomball, son, Chris Colburn of Houston, and daughter and son-in-law, Lisa and Jerry Jones of Tyler. Grandchildren; Dr. Lindsey Hunter-Ellul and husband, Paul Ellul of Tyler, Lauren and husband, Michael Stoltz of Tyler; Blake Jones of Midland, Kathryn and husband, Moutaz Muraywed of Houston, and Christa and husband, Carlos Valdez of Houston and eight great-grandchildren. The graveside service will be held at Rose Hill Cemetery, Tyler, Texas at 2:00 PM on Sunday, December 1, 2019 with Mr. James Fife officiating. Arrangements under the direction of Stewart Family Funeral Home. In lieu of flowers, memorials may be made in Samuel’s memory to MD Anderson Cancer Center, 1515 Holcombe Blvd., Houston, TX 77030 or the American Cancer Society, 1301 S. Broadway, Tyler, TX 75701.

Samuel Erven Colburn passed away on Tuesday, November 26, at the age of 96 in Tyler, Texas, surrounded by his loving wife, Lorene, and family. He was born in Panola County, on December 27, 1922 to Mary Ethel and Samuel David Colburn. He graduated... View Obituary & Service Information

The family of Samuel Erven Colburn created this Life Tributes page to make it easy to share your memories.

Samuel Erven Colburn passed away on Tuesday, November 26, at...

Send flowers to the Colburn family.