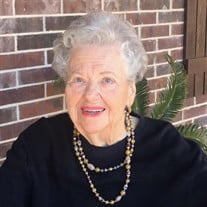 Graveside services for Billie Sue Glass Smith Ellis, 95, of Tyler will be held at Rose Hill Cemetery in Tyler at 10:00 a.m. on Tuesday, August 10, 2021 under the direction of Stewart Family Funeral Home. Sue will be buried next to her beloved husband Henry. Visitation is scheduled from 5:00 to 7:00 p.m. on Monday, August 9, 2021 at Stewart Family Funeral Home, 7525 Old Jacksonville Hwy, in Tyler. Sue left this world on August 6, 2021 at the age of 95. Sue was born on December 21, 1925 in Chandler, to Marvin and Gladys Glass (Rushing). Sue was married two times, the first to James B. (Mutt) Smith (deceased) who was the father of her 3 children and then to Henry M. Ellis (deceased), who filled the position of father for Mutt Smith after his death. Both were strong men, but Sue held her own without trying. Sue lived in Tyler most of her life, but raised her children in Dallas where as a single mother of 3, accomplished what two parents would be hard-pressed to do in raising her kids. Her son, Jimmy, went to Texas Tech University, and after graduating had job offers in the insurance industry and the petroleum industry. He chose the insurance industry mainly because his mother Sue had spent most of her working career in the Petroleum Industry and he knew he couldn’t hold a candle to her knowledge in that Industry. Sue worked for geologists and drilling companies in Fort Worth, Dallas and later Tyler and followed the fortunes of this Industry through her life. In Dallas, she raised her kids in Highland Park and was once offered a job by Ebby Halliday in Real Estate. Sue could probably have taken over the Real Estate Industry, but she chose to stay in the Petroleum Industry as a Bookkeeper and Accountant to have a steady income thinking of her children first. Sue’s daughter Patti, instead of heading to college chose to move to Tyler and raise her family, all of which were able to know Sue, their grandmother Nana as they grew up, even though Sue was more a matriarch than a doting grandmother. Melissa, while living in the Dallas area most of her adult life and raising a beautiful daughter came back to Tyler and she and Patti became excellent caregivers as her health declined. For the last years Sue also had as a caregiver Patricia Arroyo, who became a devoted friend and companion. Sue began her working career at the age of 13 working for Neil-Simpson drug store in Tyler but was still able to graduate two years ahead of her class attending Tyler High. And speaking of Sue’s memory the Historical Society has lost a favored friend and valuable historical resource because of her memory. She was the oldest sibling of two brothers who preceded her in death, Norman Leroy Glass and Robert Andrew Glass. Sue is survived by her son, James B. Smith and partner Cinda; and her two daughters, Patricia Christine (Smith) Potter and husband Jimmy and Melissa Sue (Smith) Baughn and husband Jimmy; 4 grandchildren, Peyton Potter, Julie (Potter) Baker and husband Keith, Mandy (Malone) Brown and Brenna Belle Baughn; 5 great-grandchildren, Meagan (Potter) Baker, John Phillip Hardy, Paxton Potter, Jay Hardy and Hayden Ford (who just received a rodeo scholarship to attend Texas Tech University). She is also survived by her two loving sisters-in-law, Leta Glass and Dorothy Ellis; and her loving step-daughter, Brenda Rice and husband Ronnie and their children Robin and Wheat. And yes, it does get confusing at the Thanksgiving table with every son and son-in-law named Jimmy. Sue loved her nieces and nephews as much as she did her own kids but are too numerous to mention individually here. Pallbearers will be her grandsons. They are: Peyton Potter, John Phillip Hardy, Jay Hardy, Paxton Potter, Hayden Ford and grandson-in-law Keith Baker. To know Sue was to remember her, as she would remember you. She was a dynamic individual that spoke her mind but once heard you realized that she was a woman of extreme intelligence, amazing memory and strong opinions, most of which were ahead of her time. As Sue cherished and remembered all her good friends.

Graveside services for Billie Sue Glass Smith Ellis, 95, of Tyler will be held at Rose Hill Cemetery in Tyler at 10:00 a.m. on Tuesday, August 10, 2021 under the direction of Stewart Family Funeral Home. Sue will be buried next to her beloved... View Obituary & Service Information

The family of Sue Ellis created this Life Tributes page to make it easy to share your memories.

Send flowers to the Ellis family.