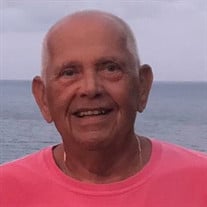 Terry J. Bricker, 79, of Tyler passed away Tuesday, September 24, 2019 in Tyler at UT Health East Texas. Terry, son of William and Della Bricker, was born October 8, 1939 in Marion, Indiana. Terry graduated from Marion High School in 1957 and attended Indiana University in Bloomington. He later joined the U.S. Army, and was stationed in Würzburg, Germany where he met the love of his life and wife of 58 years, Erika Boser. He then graduated with an accounting degree from International Business College in Fort Wayne, Indiana. Terry spent most of his career as an accountant in the telecommunications industry and retired in 2005 to enjoy the country life at Kiepersol Estates in Tyler, TX. Terry enjoyed spending countless hours in his yard keeping it so well-manicured that even Carl (Bill Murray) from the movie “Caddy Shack” would be proud, and similar to Carl he may have even tried to blow up a gopher or two. Terry also enjoyed spending time with family and friends, sharing a cordial glass of scotch whiskey, telling countless and often-repeated stories of the past, and bantering with close friends. During the fall, you would find Terry watching football and cheering on Notre Dame and Da Bears. Terry is survived by his loving wife, Erika Bricker; daughter, Tina and husband Matt; son, Todd and wife Angie; grandkids, Kelsey, Kayla, Ainsley, and Brady; brother, Larry and wife Marsha; niece, Terri and husband Claus; nephew, Brad and wife Debbie; and many other cousins, great nieces and nephews. Visitation is scheduled from 5:00 - 7:00 p.m. on Friday, October 4, 2019 at Stewart Family Funeral Home, 7525 Old Jacksonville Highway in Tyler. In lieu of flowers, memorial donations may be made in Terry Bricker’s name to the American Cancer Society, P.O. Box 22478, Oklahoma City, OK 73123, at 1-800-227-2345 or www.cancer.org.

The family of Terry J. Bricker created this Life Tributes page to make it easy to share your memories.

Send flowers to the Bricker family.