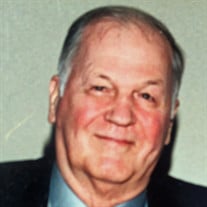 Theodore “Ted” Joachim Helbig passed away peacefully at home after a lengthy illness on January 17, 2020. Ted was born on May 13, 1936 in Wiesbaden, Germany to the late Wilhelm Eduard Helbig and Margarete Wahl Helbig. Ted was the youngest of ten siblings in the Helbig family. Times were difficult in those early war-torn years and Ted immigrated to the United States when he was just 15 years of age. This was the first of many transatlantic trips Ted would take throughout his lifetime. Ted graduated from high school in Mineral Wells, Texas in 1953. He became a citizen of the United States at age 18 and attended the University of Texas in Austin where he earned a Bachelor of Arts degree, majoring in Government. Ted enjoyed his Longhorn days and remained a faithful Longhorn fan throughout his life. Ted served proudly in the U.S. Army after graduating from UT. Ted settled in Tyler, Texas where his chosen career was in the Oil and Gas industry. He worked for Sun Oil Company, Atlantic Refining Company and as an Independent Professional Landman. Ted was an avid conversationalist and could talk for hours with anyone he met. From farmer to banker, Ted always enjoyed speaking and visiting with others. Ted also had a natural ability to fix anything that needed mending – from water wells to carpentry – Ted never met a repair challenge he couldn’t conquer. He loved working on projects and learned “on the job” most of the time. Ted had a true zest for travel. He had a constant yearning to visit all corners of the globe. In fact, when one trip had ended, Ted would begin planning the next adventure. Ted’s greatest joy was traveling with his wife Lillian. Over the years Ted and Lillian traveled to numerous destinations. They met many interesting people along the way and created a lifetime of good memories during their travel years. Ted is survived by his wife of 32 years, Lillian Connor Helbig; his daughter, Kimberly Helbig Battle and husband Raymond; sons, Kyle Helbig, and Kurt Helbig and wife Angela; grandchildren, Bryson and wife Chandler, Bennett and wife Laura, Bailey Battle, Aubrey Helbig , Abigail Helbig; great-grandchildren, Dylan and Blaire Battle; stepdaughters, Stephanie Nixon Murry and husband Larry, Hilary Nixon Bransford and husband John; and step-grandchildren, Zach Murry, Matthew Murry and wife Jessica, and Colleen Bransford. The family will have a private service at Stewart Funeral Home in Tyler, Texas. A visitation will be held from 4:00 to 6:00 p.m. on January 22, 2020 at the funeral home. The family would like to give special thanks Dr. Frank Reuter for his kind and compassionate care.

Theodore &#8220;Ted&#8221; Joachim Helbig passed away peacefully at home after a lengthy illness on January 17, 2020. Ted was born on May 13, 1936 in Wiesbaden, Germany to the late Wilhelm Eduard Helbig and Margarete Wahl Helbig. Ted was the... View Obituary & Service Information

The family of Theodore "Ted" Joachim Helbig created this Life Tributes page to make it easy to share your memories.

Send flowers to the Helbig family.