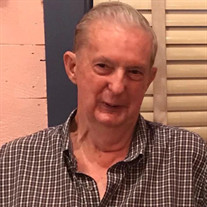 A memorial service will be held at 10:30 a.m. on July 30, 2021 at Stewart Family Funeral Home for Thomas Leon “Bud” Edmonds, 77, of Tyler. Mr. Edmonds passed away Wednesday, July 15, 2020 in Tyler as a result of the COVID-19 virus. He was born May 18, 1943 in Wichita Falls, Texas to Rufus Haskell Edmonds and Lou Emma Burge Edmonds. Mr. Edmonds was a graduate of Wichita Falls High School, and Decatur Baptist College, with graduate degrees from Southwestern Baptist Theological Seminary and East Texas State University. He was an ordained Southern Baptist minister and pastored churches in Red Springs, Dean, Mansfield, and Grand Prairie. He also served on the mission field, pastoring a church in Edmonton, Alberta, Canada. Mr. Edmonds also served as a principal in the Grand Prairie Independent School District, and retired as a vocational education teacher at John Tyler High School. He continued working after retirement with East Texas Auto Auction. Thomas was preceded in death by his first wife, Mary Kathryn Myres Edmonds and his second wife, Cindy Sides Edmonds. He is survived by his loving family including his sister, Beverly Downs, of Pearland, Texas; his children, Curtis Edmonds of Hillsborough, New Jersey and Missy Steger of Grand Prairie, Texas; his stepchildren, Bryan and Tyler Toombs; and seven grandchildren, Trevor Rowe of Arlington, Texas, Kathryn and Stephanie Edmonds of Hillsborough, New Jersey, Courtney Toombs of Dallas, and Connor, Camille, and Cayden Toombs of Royse City. He is also survived by a niece, Lori Kluesner of Pearland, and a nephew, Jody Downs of Pearland. If desired, memorials may be made to the First Tee of Greater Tyler, at https://www.firstteegreatertyler.org/ways-to-give/.

The family of Thomas Leon Edmonds created this Life Tributes page to make it easy to share your memories.

Send flowers to the Edmonds family.