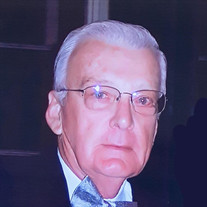 Dr. Thomas L. Fernandez, former UT Tyler Professor and Vice President of Student Affairs passed away January 26, 2022. He was 92. He is survived by his loving wife of 28 years, Pat Fernandez, four daughters from his first marriage and their husbands, four step-daughters and their husbands, fifteen grandchildren, 26 great-grandchildren, and 2 great-great-grandchildren. His kindness, love, playfulness and flair for ironic humor will be sadly missed. He received his undergraduate degree, and later, an Honorary Doctorate from Marietta College; his Master’s Degree from the University of Alabama; and his PHD from the University of Missouri. Prior to moving to Tyler, Dr. Fernandez was Vice President of Student and Academic Services from 1969-1979 at Emory University where he also was a major contributor to the establishment of the Law School. After arriving in Tyler, he taught Business Communication, Public Speaking, Debate, Ethics in Business and Persuasive Communication, just to name a few. He served as Vice President of Student Affairs from 1984-1991, given the challenge of the creation of the UT Tyler School of Nursing, he jumped at the chance. He worked endless hours and fought with great determination, against all odds and succeeded. The now respected Nursing School brags of hundreds of highly sought-after graduates. Dr. Fernandez was also very active in the East Texas community. He served on the Protocol Review Board for East Texas Medical Center as well as serving on the Boards of Directors for The American Cancer Society and Discovery Science Place in Tyler, and many others. He was also on the Chair Advisory Board for The Texas Alliance for Minorities in Engineering and the President of The East Council on World Affairs in Tyler which was a participant in the Sister Cities Program. He was an accomplished public speaker and published writer of Oral Communication For Business, which is still taught today. He had a great knowledge and respect for the subject of Ethics in Business and the discourse surrounding our education system. He took that love of ethics to many Fortune 500 corporations to help guide their teams. He offered guidance to politicians to keep them headed on an ethical trajectory. His ethical standards, wisdom and counsel will be greatly missed Dr. Fernandez lived a life of public service to the universities that employed him, to his students and to the communities in which he lived. He was a fierce advocate for freedom of speech, diplomacy and honesty. He touched many students lives by helping them find their voice in speech and communications. He always believed that giving students a clear vision of what was right and wrong would challenge them to think for themselves and realize that words have consequences and carry emotion. A “Celebration of the life of Dr. Thomas L. Fernandez” will be held Sunday February 27, 2022 at Hollytree Country Club, 6700 Hollytree Dr., Tyler from 1pm-3pm.

Dr. Thomas L. Fernandez, former UT Tyler Professor and Vice President of Student Affairs passed away January 26, 2022. He was 92. He is survived by his loving wife of 28 years, Pat Fernandez, four daughters from his first marriage and their... View Obituary & Service Information

The family of Dr. Thomas L. Fernandez created this Life Tributes page to make it easy to share your memories.

Send flowers to the Fernandez family.