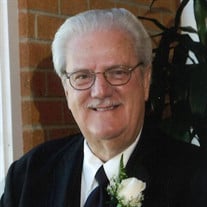 Rev. T. W. Maddux, age 83, joined the Heavenly host on April 16, 2021, as he passed from his earthly life to his eternal one. He was born September 7, 1937 to Johnnie E. and Beulah Maddux. Tom was raised in Denison, Texas where, as a youngster, he and his buddies would sometimes hop a train and ride to a jumping off point when the train slowed before crossing the Red River. As he got older, he enjoyed riding his motorcycle and playing on the school football team as a running back. He and the family recently enjoyed reading the newspaper clippings describing his many touchdown runs. Tom joined the Air Force in 1955. After completing basic training, he married Dru, his high school sweetheart, on June 10, 1955. Tom was assigned to the Strategic Air Command Headquarters at Offutt Air Force Base in Nebraska upon completion of schooling in Cheyenne, Wyoming and Indianapolis, Indiana. Tom was proud to serve his country as evidenced by his receipt of two consecutive Airman of the Year awards. Their son, Rick, was born in the Offutt Air Force Base hospital. Tom was honorably discharged from the Air Force in 1963 after four years of active service and four years as a reservist. Tom was employed by Temco Aircraft for three years in Greenville, Texas where daughter Sandi was born. Answering the call to serve in a different capacity, Rev. Maddux was an ordained minister with the Assemblies of God for a total of 56 years. Forty-one of those years were in full-time pastoral ministry and care. Thirty-two years were in Tyler at the former Grace Chapel Assembly of God. Tom also served for many years in the role of Presbyter covering a multi-county area. Upon his retirement from the Presbytery role, the North Texas District honored him with the tribute of a lifetime Honorary Presbytership, an award bestowed on a select few as voted by his fellow ministers. Rev. Maddux also served on various sectional and district level committees, the board of Teen Challenge, the board of the Tyler Chapter of the Full Gospel Business Men’s Fellowship and others. Tom loved working with his hands and was a skilled craftsman. He utilized these skills for building / refurbishing churches, commercial buildings and homes. Tom loved hunting especially in the mountains of Colorado. Closer to home, he was a long-time member of the Pecan Ridge Hunting Club and hunted numerous locations throughout Texas. No matter the location, the special comradery with his hunting buddies was as good as the hunt. Tom loved Louis L’Armour novels, sweets and a good truck. His greatest love was for God and his family. Life will not be the same without his quick-witted humor, pranks, competitive WaHoo playing, hilarious storytelling, and tender prayers. He is survived by his wife, Dru; son, Rick Maddux and wife, Cheryl; daughter, Sandi Knowles and husband, Mark; grandsons, Chad Maddux, Josh Knowles and wife, Katherine, and Clay Knowles. The added blessing of age are his great grandchildren Hank, Boone, and Maeve Knowles. He is also survived by his brother, David Maddux and sister, Kathleen Lindsey and a host of other family members. Tom had a multitude of cherished friends. Special recognition is given to Johnny Patterson his very close friend of 60 years. Also, to Roy Robinson and wife, Cindy along with their children who have shown much love to Tom and Dru. Honorary pall bearers will be Tom’s grandsons, Chad, Josh and Clay; his brother David, Johnny Patterson and Roy Robinson. The family appreciates the hundreds of condolences, sweet messages and acts of kindness received. Due to Covid related issues a private, family only graveside service will be held. If desired, in lieu of flowers, a memorial contribution can be made to Pleasant Hills Children’s Home - PO Box 1177 - Fairfield, TX 75840.

Rev. T. W. Maddux, age 83, joined the Heavenly host on April 16, 2021, as he passed from his earthly life to his eternal one. He was born September 7, 1937 to Johnnie E. and Beulah Maddux. Tom was raised in Denison, Texas where, as a youngster,... View Obituary & Service Information

The family of Thomas Wayne Maddux created this Life Tributes page to make it easy to share your memories.

Send flowers to the Maddux family.