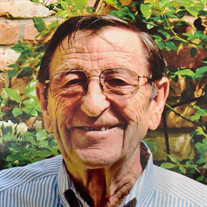 Graveside services for Tom Pyle, 90, of Tyler will be held on Saturday, September 11, 2021 at 10:00 a.m. at Rose Lawn Cemetery in Tyler with Pastor John Johnson officiating under the direction of Stewart Family Funeral Home. Mr. Pyle passed away peacefully at his home in Tyler, Friday, September 3, 2021. He was born June 30, 1931 to Guy and Louise Pyle in Boulder, Colorado. He served in the Air Force for two and a half years mainly in Oklahoma. Tom later graduated from University of Colorado at Boulder with a BS in Accounting. He worked for Ohio Oil Company in Colorado and then for Bank of America as a Trust Officer in San Francisco. After 5 years he went out on his own in real estate and began his real career. Gradually he built his own small empire through hard work and many years. He married Shirley in 1972 in San Francisco where they had three children. Tom became intrigued with the oil and real estate opportunities in the great state of Texas and moved his family there in 1988. They spent ten years in Corpus Christi and subsequently moved northward to Tyler, which became home to the Pyles thereafter. Tom was preceded in death by his brother, Harold, of Minnesota; and his sister, Phyllis Allsup Wahlfeldt, of Colorado. He is survived by his loving family including his wife, Shirley; his three children, Toma Donley, Mari Haft of Tyler, and Matt Pyle of California; and ten grandchildren, Mara, Luke, Paul, Travis, Trevor, Calvin, Trinity, Jonah, TJ, and Melia. Since Tom loved animals, if desired, memorials may be made to Tiger Creek Animal Sanctuary (www.tigercreek.org) 17752 FM 14, Tyler, Texas 75706 or your favorite animal charity.

The family of Tom Pyle created this Life Tributes page to make it easy to share your memories.

Graveside services for Tom Pyle, 90, of Tyler will be held on...

Send flowers to the Pyle family.