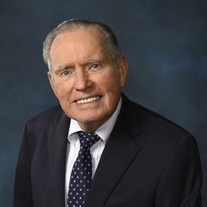 Tommy Eugene Barber, a long-term resident of Tyler, Texas passed away peacefully at home on October 30, 2019 at the age of 87. Tom Barber is survived by his sister Bobby Marie Chapman and his children Robert Louis Barber and his wife Elena, Lucy Barber Griggs, Jim Bob Barber and his wife Deliza, Richard Lee Barber, Amy Barber Steves and her husband Kurt Steves, and twelve grandchildren and four great-grandchildren. He is predeceased by his parents Robert Milo Barber and Helen Marie Barber; his wife Charlene Barber; his first wife, Lucy Barber; son Thomas Milo Barber. Tom was born in Marshall, Texas on November 28, 1931. He served in The United States Air Force during the Korean War. He graduated from the University of Texas and became a licensed professional engineer. Over the years Tom was an Account Representative for E.F. Hutton; Smith County Republican Party County Chairman; Assistant Regional Administrator HUD Region 6, Director, Arkansas Area Office US Department of HUD; Founder and President of Thomas E. Barber & Associates, City and Small Town Planners; Barber-Brannon-Traylor-Todd, Inc. Architects Engineers and Planners; Partner in Cates-Decker-Barber, Architects and Engineers; and Managing Partner, Hollytree Country Club. He was very involved with his church, Christ Episcopal. Tom enjoyed the simple pleasures of life such as spending time with friends and family. He was known for his generosity. Tom was an avid golfer and enjoyed a good game of gin rummy with friends. He was known for helping many people get started in their careers. He will be deeply missed by his friends, family and all who knew him. A memorial service is scheduled for Saturday, November 9, 2019 at 11:00 a.m. at the Christ Episcopal Church on Bois D Arc in Tyler, Texas. A private graveside will be held at Cathedral in the Pines cemetery in Tyler. In lieu of flowers please make donation in Tommy’s memory to the American Cancer Society, 1301 So. Broadway, Tyler, TX 75701.

Tommy Eugene Barber, a long-term resident of Tyler, Texas passed away peacefully at home on October 30, 2019 at the age of 87. Tom Barber is survived by his sister Bobby Marie Chapman and his children Robert Louis Barber and his wife Elena,... View Obituary & Service Information

The family of Tommy Barber created this Life Tributes page to make it easy to share your memories.

Send flowers to the Barber family.