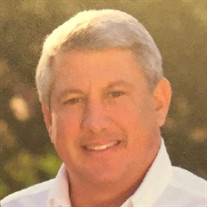 A graveside service for Trant Lowry Kidd, 57, of Tyler, will be held on Wednesday, May 20, 2020 at 9:30 a.m. at Rose Hill Cemetery with Rev. Buddy Powell officiating under the direction of Stewart Family Funeral Home. Visitation will be held on Tuesday, May 19, 2020 from 5-7 p.m. at Stewart Family Funeral Home. Trant, our beloved father, husband, and uncle, passed suddenly Thursday afternoon, May 14, 2020. Trant was born April 15, 1963, the third child of L. Lee Kidd and Patricia Lea Trant. He spent his childhood on Jan Avenue, riding bikes and getting into trouble with his older brother and sister. He attended San Marcos Military Academy before returning to Tyler to graduate from Robert E Lee High School in the class of ’82 as a pole-vaulting champion. He made Tyler his home, following the path of his parents, grandparents, great-grandparents, and great-great-grandparents, making the Kidd name a familiar one to East Texas. Trant was a devoted member of St. Paul United Methodist Church of which his great-grandfather was one to have laid the cornerstone and where his grandmother, father, and uncle were all lifetime members. Trant was a member of the Order of the Rose, Willow Brook Country Club, Dallas Caddo Club and the ETAPL. Trant learned the oil business from his father and made a lifetime career in the oil and gas industry. He was a man of determination, action and hard work. When he wasn’t getting leases signed, he could be found enjoying the outdoors. An avid hunter, fisherman and cattleman, Trant had a deep appreciation for wildlife and nature. Among his favorite pastimes were crappie fishing on Caddo Lake, running trot lines along the Pecos river at Kidd Ranch, and camping out on the Sabine at his River Tract. He loved spending time working and improving his land, planting pine trees, fixing fences and spending time with his family. Trant was always generous to those who had fallen on hard times and never gave up on anyone. He had a great love for life, adored his children and delighted in family trips. Trant was a God-fearing man who has gone to be with our Heavenly Father and joins his loved ones there, who wait for him. Trant was preceded in death by his parents, his brother Lex L. Kidd, and his uncle Hubert Edward Kidd Jr. Trant is survived by his loving family including his wife, Tiffany Daughtry Kidd; children, Elizabeth Louise Kidd, Cameron Lee Kidd, and Lily Isabelle Hammer; aunt, Barbara Kidd Caserta; sister, Kimberly Kidd Maddox and husband Tim; nephews and nieces, Tommy Lee Fuller and family, Patrick Fuller and family, Kathryn Maddox Moore and family, Karson Kidd and family, Kelsey Kidd Eiche and family, Kalum Kidd, Levi Kidd; cousins, Harry L. Caserta Jr., Kay Kidd Caserta, Melissa Heidrick and husband Matt, Hubert Edward Kidd III (Hoopy), Caroline Kidd, and Victoria Kidd; and great nieces and nephews, Lottie Eiche, Andrew Fuller, and Madeline Moore, all of Tyler. Pallbearers will be Tommy Lee Fuller, Brian Humphries, Stuart Humphries, Raymond Hedge III, David Wade, Mark Tarver, Mitch Dunham, and Harry L. Caserta Jr. Trant was cherished by his family and will be missed terribly. “For I know the plans I have for you”, declares the Lord, “plans to prosper you and not to harm you, plans to give you hope and a future”. Jeremiah 29:11

A graveside service for Trant Lowry Kidd, 57, of Tyler, will be held on Wednesday, May 20, 2020 at 9:30 a.m. at Rose Hill Cemetery with Rev. Buddy Powell officiating under the direction of Stewart Family Funeral Home. Visitation will be held... View Obituary & Service Information

The family of Trant Lowry Kidd created this Life Tributes page to make it easy to share your memories.

A graveside service for Trant Lowry Kidd, 57, of Tyler, will...

Send flowers to the Kidd family.