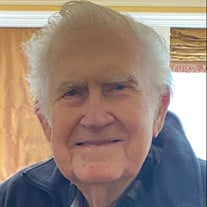 Truitt Wade Stamps, a longtime resident of Tyler, died March 3, 2022 at the age of 88. He was born November 23, 1933, in Chapel Hill, Texas. Truitt was married to his late wife, Lillie Joyce Perry Stamps in 1954. They were married 54 years and raised their two daughters, Donna and Jan. He was known as “Papaw” to his Grandchildren, Great- Grandchildren, family, and friends who loved him. He was preceded in death by his parents, Effie Elliott Stamps and Leon Stamps, late wife, Lillie Joyce Perry Stamps, and his daughter, Jan Stamps Hogan. Truitt’s career as a Millwright Machinist began with a six-year Millwright apprenticeship with McCullough Tool Company in Tyler, Texas. During his apprenticeship, Truitt attended Tyler Jr. College for continuing classroom Millwright education with on job training in the fields of machinist, mechanics, and mechanical and industrial maintenance. Goodyear Kelly Springfield Tire Company was built in Tyler, Texas in 1961. After completing his six-year apprenticeship, Truitt was the 22nd person hired by Goodyear Kelly Springfield for a 37-year career and he retired in 1995 with Goodyear Kelly Springfield. Truitt was a member of the Sharon Temple Shriners and a member of the Sharon Temple T Model Motor Patrol unit. He has been a faithful and dedicated Noble of the Mystic Shrine for 50 years. Truitt received an honor with a 50-year certificate in appreciation and recognition of his service and loyal support and philanthropy for the Shriner’s hospitals for children. That was a very special night for our Dad with his daughters, Donna & Jan by his side attending the celebration of his Fifty years of dedicated service to the Shrine. We are enormously proud of You, Dad. Truitt’s favorite hobby was his Shop. He always had projects going for his family and loved building everything and anything for his family. Truitt was a great Christian man and member of the Friendly Baptist Church in Tyler and his later years at Bethel Baptist Church in Chapel Hill. He was a very Devoted Loving Husband, fabulous Father, Grandfather and Great-Grandfather. He never missed one activity for anyone in the family. Truitt enjoyed our family time together, family holidays and our family vacations together every year to our favorite places which included the Bahamas and Lake Tahoe. Truitt is survived by his daughter, Donna Stamps Turner, and son-in-law, Jay of Tyler; grandchildren, Elizabeth (Sean) Ruff of Austin, William (Nicole) Robbins of Tyler; and great-grandchildren, Lillie, London, Riley, and Whitman. Pallbearers: Dale Gill, Donnie Gill, Jay Turner, William Robbins, Doyle Perry, Richard Rippamonti. Honorary Pallbearers: Danny Joe Gill, Ronnie Gill, Charlie Kirkley, Rodney Rogers. Graveside Services will be held at Mason Cemetery, Arp, Texas - Date: Tuesday, March 8, Time: 2:00 pm. Officiated by Mr. Dennis Black. In lieu of flowers, donations can be made to Sharon Temple Center, 10027 State Hwy 31 E, Tyler, Tx.

Truitt Wade Stamps, a longtime resident of Tyler, died March 3, 2022 at the age of 88. He was born November 23, 1933, in Chapel Hill, Texas. Truitt was married to his late wife, Lillie Joyce Perry Stamps in 1954. They were married 54 years... View Obituary & Service Information

The family of Truitt Wade Stamps created this Life Tributes page to make it easy to share your memories.

Send flowers to the Stamps family.