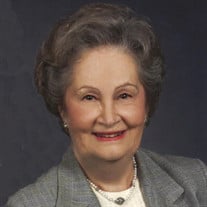 Varina Powell Johnson passed away peacefully on August 30, 2020. She was born in Tyler, Texas on July 24, 1926, to Lee Powell and Varina Garnett Powell. Her father was the City Manager of Tyler who oversaw the laying of Tyler’s famous red brick streets, and her mother was one of five sisters born to Varina Yarbrough Garnett and John Wickliff Garnett. After graduating from high school in Sherman, Texas, Varina attended North Texas State Teachers’ College (UNT) in Denton majoring in Music, where she met her future husband JW, or Jubby. He was her piano teacher, and after many invitations, she finally agreed to a date. They married in June of 1949, and were married for 66 years. Varina was a wonderful violinist and music teacher. She studied at Julliard from 1948 through 1949, and taught the string program at Gladewater High School for two years. When she and JW decided to move back to Tyler in 1957 to raise their children, Varina taught music at many public schools before going to Hubbard, where she and Beverly Harrison were instrumental in starting the string program for TISD. Varina also played violin in the East Texas Symphony for 20 years and was a member of Marvin Methodist Church, the Junior League of Tyler, the First Literary Club, and the Tyler Garden Club. She was also an avid bridge player. Varina and JW devoted themselves to music education. They will be honored by TJC in January 2021, when the orchestra pit at the new Arts Building will be named in their honor. They spent many wonderful hours playing there. Varina was preceded in death by her husband JW, her mother and father, and her younger sister, Martha. She is survived by her children, Tina Johnson and her husband Mark Hattan, her son JW Johnson Jr. and his wife Gigi Gould; her beloved grandchildren, Alice Hattan and Cameron Johnson; her niece, Nancy Mogle; nephews, Silas Johnson, Matt Wilkins, Steve Wilkins, Tim Wilkins, and Andrew Wilkins; and brother-in-law, Ron Wilkins and many cousins. In Varina’s memory, donations may be made to the Naming Opportunity in honor of JW and Varina Johnson for the TJC Rogers Palmer Performing Arts Center through the TJC Foundation, PO Box 9020, Tyler, TX 75711; to The Hospice of East Texas Foundation, 4111 University Blvd., Tyler, TX 75701; or to the music fund at Marvin Methodist Church 300 W. Erwin St., Tyler, TX 75702. For the safety of her family and friends, there will be a celebration of Varina’s life in the future.

Varina Powell Johnson passed away peacefully on August 30, 2020. She was born in Tyler, Texas on July 24, 1926, to Lee Powell and Varina Garnett Powell. Her father was the City Manager of Tyler who oversaw the laying of Tyler&#8217;s famous... View Obituary & Service Information

The family of Varina Powell Johnson created this Life Tributes page to make it easy to share your memories.