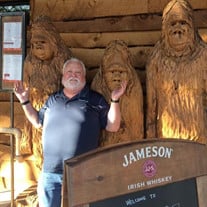 Verne J Harper, 69, of Tyler Texas was born on October 8, 1952, in Greeley, Colorado to John D. Harper, Sr. and Vesta Pearl (Bray) Harper. He departed this life on March 12, 2022. Verne graduated from Alameda High School (Lakewood, CO) in 1970. He received his bachelor’s degree in Business Administration from LeTourneau University in 2001. He was a professional petroleum landman until he retired from Sequitur Energy in early 2020. During his career he enjoyed solving the vast puzzles that mineral interest chains of title are known for. He also enjoyed teaching new landmen the trade, having educated many of them both formally and informally. He was a self-described workaholic dedicating as much time as he could to solving the mystery behind the many prospects upon which he worked. He often mused that the more complicated the issues in the chain of title, the more fun the endeavor. Although he was known to be a hard and dedicated worker, he also enjoyed many hobbies and traveling. He was able to travel to many foreign countries which began after he graduated from high school when he opted to take a trip abroad as a graduation present from his father. On this trip he traveled to Israel and many other surrounding countries in the region. He was able to pick up his travel bug later in life enjoying taking cruises to many different locations. He also traveled to England, Scotland, and other European countries to research the early history of the Harper family. In addition to travelling, Verne had several other interests and hobbies. He loved to read science fiction books and fictions books that explored civilization and the many problems and triumphs that civilizations experience. He would often refer back to his fiction books and compare developments in current day with those things only theorized about in those books. He was amazed by the foresight of some science fiction authors to predict technological advances that would later become reality. Verne was a diehard Denver Bronco fan and he was also an avid fan of any type of auto racing that was in season. Since his retirement, he also enjoyed seeing his grandchildren more. He was affectionately known as “Pappy” by all his grandkids. Verne was preceded in death by his mother, Vesta Pearl Harper and his son, Skyler Todd Harper. Verne is survived by his wife, Yackeisha Kadedra Stewart of Negril, Jamaica and her son Jayquan. He is also survived by his father, John D. Harper, Sr. and his wife, Norma; his brothers and sisters, John D. Harper, Jr., and his wife Esther, Garry Harper, and his wife, Julie, Marjorie Thompson and her husband Byron, Mari Orr and her husband Chuck. Verne is survived by his children, Shanda Camu and husband Jason, Jeremy Harper and wife Shelby, Weston L Harper and wife Lynsey, daughter-in-law Loni Harper Sebring; as well as eight grandchildren, Jude Camu, Daffnie Harper, Aiden Harper, Skyler Aaron Harper, Kelly Harper, Evelyn Harper, Baron Harper and Penny Harper. Also left to cherish his memory are many nieces and nephews and friends. A memorial service will be held on Saturday, March 26, 2022 at 11:00 a.m. at Carpenter’s Cross Baptist church in Flint with Pastor Ron Ivey officiating. In lieu of flowers, donations may be made to Carpenter’s Cross Baptist Church, 18110 FM 344 W., Flint, TX 75762.

The family of Verne J. Harper created this Life Tributes page to make it easy to share your memories.