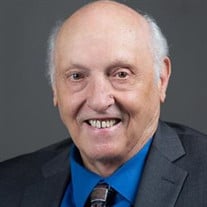 Vincent J. Richbourg, a long-time, self-employed businessman and devoted Catholic steward, was taken to his Lord on Dec. 30, 2019. Vince was a loving and supportive husband and father, a gifted athlete and, eventually, a country-western dancer. Vince was introduced by friends to his late wife, Carolyn Kunz, in 1961 while he attended St. Edward’s University in Austin. In 1964 they were joined in a marriage that would last 49 years, and the couple had eight children. It was with the help of family friends that Vince had been able to enroll at St. Edward’s and then earn a tryout with the then Kansas City Athletics organization. He remembered those who helped him along the way, and brought a similar attitude of service to all that he did, and especially the clients of Richbourg and Associates, LLC. Vince, a CPA, founded Richbourg and Associates in 1974 and led it for 40 years. He loved that several family members, including his father, worked with him over the years. Clients – so many of whom became personal friends – included a large number of health care professionals, small business owners, priests, and several Major League Baseball players. In 2014, Richbourg and Associates merged with Gollob Morgan Peddy, PC, and Vince and his son Gregory Richbourg became partners at GMP. That same attitude of service is what Vince brought to his life-long membership in the Cathedral of the Immaculate Conception Parish. He was a Eucharistic Minister and actively served three bishops on its Finance Council and several related development committees. He served as a co-founder and officer or board member of the Tyler Catholic School Foundation (TCSF) from its inception in 1983. For many years he also was an elected member, including president, of the Tyler Catholic School System Board. In 2014 the TCSF honored Vince and his late wife with the prestigious Milam Joseph Hope For Humanity Award, given annually in recognition of tireless efforts in support of Catholic Education. While working and raising his family, Vince remained involved in sports, primarily as a high school and college basketball official. For 28 years he drove his red Volkswagen Karman Ghia, even on snowy nights, to assigned games. In 2000, he was inducted into the Texas Association of Sports Officials Hall of Fame. As a spectator, he and a close group of friends enjoyed Monday Night Football games together. Later in life he and Carolyn became enthusiastic country-western dancers, researching good dance halls wherever travels took them. At St. Edward’s Vince had been a letterman, team captain and stats leader in basketball and baseball, and a winning cross country runner. His athletic, academic and social leadership resulted in his election as the school’s Man of the Year in 1961. He enjoyed long relationships with several friends from St. Ed’s, and regularly attended reunions. In 1989 he was inducted into its Athletic Hall of Fame. After graduating from St. Ed’s in 1961, the shortstop tried out for the then Kansas City Athletics organization and was placed on its AA team in Albuquerque. After one season he was conscripted into the Army, made a military police officer and played in Army baseball and basketball leagues while serving in Germany. A shoulder injury sustained there effectively ended his professional baseball career, and it was only a few years before he came back to Tyler to work. He was a lifetime member of the Association of Professional Ballplayers of America, a baseball coach and a past treasurer of the Tyler Baseball Commission. Vince is survived by his children and their spouses: Gregory and Christy Richbourg of Tyler, Janet and Brian Windham of Midlothian, Judith Richbourg of Tyler, Diane and Dan Webber of Houston, Kenneth and Rae-Ann Richbourg of Tyler, Alan Richbourg of Tyler, David and Ashley Richbourg of Midlothian, and Daniel and Janice Richbourg of Smithville, Mo. Vince was “Papa” to 12 grandchildren: Bradley and Ryan Richbourg, Andrew and Joshua Windham, Grace, Samantha and Lily Webber, Caroline and Joseph Richbourg, Thomas and Hayden Richbourg, and Isabel Richbourg. Other beloved family members include Patrick Osborn of Garland and Ron Carnes of Olathe, Mo. He also is survived by Bethwyn Bingham, whom he planned to marry. On March 23, 1939, in Tyler, Vince was born to Charles Orval Richbourg and Agnes Mabel Richbourg. His parents, and his sister Cynthia Richbourg Osborn, preceded him in death. Rosary is Friday, Jan. 3, 2020 at 5:30 p.m., followed by visitation from 6-8 p.m. at Stewart Funeral Home, 7525 Old Jacksonville Highway, Tyler. Mass of Christian Burial will be on Saturday, Jan. 4, at 10 a.m. at the Chapel of Saints Peter & Paul, 1435 ESE Loop 323, Tyler. Presiding will be Vince’s personal friend Most Reverend Edmond Carmody. Interment will follow at Cathedral in the Pines Cemetery, 7825 S. Broadway, Tyler. Pallbearers are Brian Windham, Dan Webber, Kevin Simpson of Bullard, Ben Watson of Tyler, Ben Gordon of Dallas, Mike Smith of Tyler, and John Holey of Lindale. Honorary pallbearers are Michael Bingham of West Palm Beach, Fla., and Scott Holey of Lindale. In lieu of flowers, the family requests that donations be made in Vince’s name to the Tyler Catholic School Foundation, Vincent and Carolyn Richbourg Family Scholarship Fund, PO Box 131175, Tyler, TX 75713, (903) 526-5988; or to Mother Teresa Homeless Shelter, 513 Sam Rankin Street, Corpus Christi, TX 78401.

Vincent J. Richbourg, a long-time, self-employed businessman and devoted Catholic steward, was taken to his Lord on Dec. 30, 2019. Vince was a loving and supportive husband and father, a gifted athlete and, eventually, a country-western dancer.... View Obituary & Service Information

The family of Vincent J. Richbourg created this Life Tributes page to make it easy to share your memories.

Send flowers to the Richbourg family.