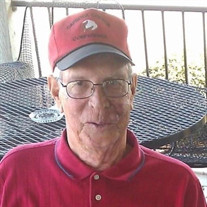 Waldo Emerson McElveen was called home to the Lord on January 27, 2022 in Lufkin, Texas. “Mac” was born on May 29, 1932 in Statesboro, Georgia to Homer and Molly McElveen. He worked the farm until he joined the United States Army. He served from 1949-1952 and was stationed in Anchorage, Alaska during the Korean War. After serving in the military, he met his beautiful wife, Thelma Tucker, in Dallas, Texas. He got her to sit on his lap on the first date by taking her on a roller coaster at an amusement park. They dated and then were married on April 20, 1957. They were married for 60 years. Mac was a salesman for Watson Electric for 35 years while residing in Lufkin. He and Thelma retired 25 years ago to a little slice of heaven on Lake Palestine called Emerald Bay in Bullard, Texas. Mac loved to fish off the dock, play golf, sing in the choir at Emerald Bay Community Church, and take golf cart rides around the Bay. He loved the Lord, had a servant’s heart, and was a faithful prayer warrior. Mac is survived by his son, David and his wife, Melissa of Bullard, TX; son, Clay and his wife, Lisa of Lufkin, TX; grandchildren, Tara Bailey of Tyler, TX; Dr. Jessica Johnson and husband, Zach of Abilene, TX; Chad and wife, Sable of Katy, TX; Katie Edwards and husband, Philip of Lake Charles, LA; and Lindsay and fiancé, Michael Floyd; great-grandchildren Aubrey, Gracie, Ellie, Waylon, Riley, Lane, Addi, and Gabriel; and numerous cousins, nieces and nephews. Preceded in death by his wife, Thelma McElveen and all of his siblings. A memorial service will be held on Saturday, February 19, 2022 at 2:00 p.m. at Emerald Bay Community Church with Rev. West Bynum and Chad McElveen officiating under the direction of Stewart Family Funeral Home. In lieu of flowers, donations can be made to Emerald Bay Community Church, 160 LaSalle Rd, Bullard, Texas 75757.

Waldo Emerson McElveen was called home to the Lord on January 27, 2022 in Lufkin, Texas. &#8220;Mac&#8221; was born on May 29, 1932 in Statesboro, Georgia to Homer and Molly McElveen. He worked the farm until he joined the United States Army.... View Obituary & Service Information

The family of W. Emerson "Mac" McElveen created this Life Tributes page to make it easy to share your memories.

Waldo Emerson McElveen was called home to the Lord on January...

Send flowers to the McElveen family.