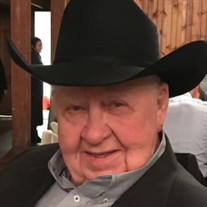 Graveside services for Walter Larsh, 94, of Frisco will be held on Saturday, April 16, 2022 at 2:00 p.m. at Rose Lawn Cemetery with Rev. Nathan “Buddy” Powell officiating under the direction of Stewart Family Funeral Home. Walt passed away Tuesday night, April 12, 2022 in his assisted living apartment at Parson’s House in Frisco. He was born to Joseph and Gladys Larsh. Walter proudly served in the US Navy in World War II on the USS Franklin D. Roosevelt and USS Midway, where he received the Victory Medal when he was honorably discharged. When he returned to Northern Michigan where he met the love of his life, Patricia. They were married in 1951. Immediately after their wedding he was called back for active duty and served again in the US Navy on the USS Bach during the Korean War. With the support of his wife, he was a graduate of Lawrence University, Appleton, WI, and the first in his family to earn a college degree. Walt spent the majority of his career and retired from Mercury Marine in Fond du Lac, WI. He traveled the world as the Director of Sales Training and later settled in Texas focusing on marine industry sales. His family has fond memories of boating and snowmobiling at the cottage in Northern Wisconsin. Walter was very involved in the Clown, Hillbillies, and Jester units of the Sharon Shrine Temple in Tyler, TX. He was passionate about the Shriner’s mission to help children, and enjoyed the social activities and friendships that lasted his lifetime. Walter was preceded in death by his parents; his sister, Joy Ebeling; his brother, Raymond Larsh and wife, Patricia. He and Patricia were married 66 years before her passing in 2017. Surviving are his four children, Daniel Larsh and wife, Caren, Brian Larsh, and wife Inge, Linda Staif and husband, Greg, and Nancy Harper and husband Paul. He also is survived by nine grandchildren and seven great-grandchildren. Proudly serving as Pallbearers are Walt and Pat’s Grandsons Chad Larsh, Austin Larsh, Jordan Hicks, Justin Hicks, Zachary Staif, and Nicholas Staif. Honorary pallbearers will be members of Sharon Temple Shriners. If desired, memorials may be made to Shriner’s Children's Hospital Shreveport in Walter’s name, 3100 Samford Ave., Shreveport, LA 71103 (www.shrinerschildrens.org/en/locations/shreveport).

The family of Walter Joseph Larsh created this Life Tributes page to make it easy to share your memories.

Graveside services for Walter Larsh, 94, of Frisco will be held...

Send flowers to the Larsh family.