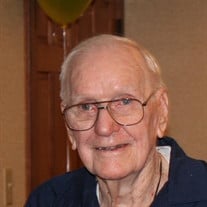 A graveside service with military honors for Walter Woodrow Lewis, 97, of Tyler, TX will be held on Tuesday, December 17, 2019 at 1:00 p.m. at Guedry Cemetery in Batson, TX with Rev. Art McClelland officiating. The service is under the direction of Stewart Family Funeral Home. Honorary Pallbearers will be Margaret Lewis, Ph.D., Harry David Lewis and Paul Lewis Douglas. Walter passed away Thursday, November 29, 2019 at Watkins-Logan Texas State Veterans Home in Tyler, where he lived happily for seven years. He was born January 8, 1922 in Saratoga, Texas to Thomas Buchanan Lewis and Elizabeth Freeman Lewis. He was the second youngest of seven children. He was preceded in death by his brothers Wilbur Lewis, Tom Lewis, Paul Lewis, Harry Lewis, and sisters Blanche Lewis Hunt and Elizabeth Lewis Douglas, and by his first wife Violet Penn Lewis and second wife, Alfreda Guynes Jones Lewis. Walter is survived by his niece Margaret Lewis, Ph.D., of New Jersey, and nephews Harry Lewis and Paul Douglas of Texas. Walter enlisted in the US Army/Air Force at the beginning of WWII and was stationed at Guadalcanal in the Solomon Islands, South Pacific, where he was a B24 crew chief. Following the end of war he returned to Texas. He and his first wife, Vi, were great travelers. Walter became a master plumber in Houston during the growth years following the war. He oversaw many structures being built during that time. Among them were hospitals, hotels, municipal centers, etc. One of his proudest achievements was the plumbing contract for the NASA Johnson Space Center Moon Rock Receiving Lab in Houston. Following his retirement, Walter and Freida volunteered, and worked joyfully with the organization Texas Baptist Men Church Builders for twenty years. They helped build churches all over this country and others. Walter said to us many times, “That was absolutely the best time of our lives.” While living in Tyler, he was a member of Pollard Memorial United Methodist Church. When unable to get to the church, he was visited regularly by members of his church. If desired, memorials may be made to Pollard Memorial United Methodist Church in Tyler, TX. Walter is the last of the Lewis kids: five brothers and two sisters. They all were the nicest and most fun people you’ve ever been around. We were a pretty close family, not geographically, but in spirit. Being around them all when we did get together was magical. The five boys all competing, telling stories and jokes, playing and slamming dominos down, singing and laughing was so special. It is the end of an era.

A graveside service with military honors for Walter Woodrow Lewis, 97, of Tyler, TX will be held on Tuesday, December 17, 2019 at 1:00 p.m. at Guedry Cemetery in Batson, TX with Rev. Art McClelland officiating. The service is under the direction... View Obituary & Service Information

The family of Walter W. Lewis created this Life Tributes page to make it easy to share your memories.

A graveside service with military honors for Walter Woodrow Lewis,...

Send flowers to the Lewis family.