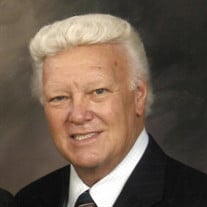 Waymon Larry McClellan, 80, known as Larry, passed away on Saturday, February 20, 2021 at Watkins-Logan Texas State Veterans Home in Tyler due to complications from Alzheimer’s. He was born August 18, 1940 in Tyler to William Lindsay McClellan and Doris Marie McClellan. Larry grew up an athlete and outdoorsman; Golden Gloves champion, defensive back, center fielder and a crack shot with a .22 rifle. He joined the Navy at 19 and served as a Navy Corpsman. Once home, Larry earned his M.A. in History and taught at John Tyler and Bishop T. K. Gorman high schools. Another passion of Larry’s was music, singing as a soloist at Green Acres Baptist Church and leading music at Westlake Baptist near Chandler and Little Hope Baptist near Canton. Larry was a devoted family man, and this love of family extended to his study of genealogy, leading to his membership in multiple historical societies where, as an animated and avid conversationalist, Larry was a frequent presenter throughout East Texas. One of Larry’s greatest joys was being Papa to his grandchildren, teaching them about love and life through nature and song. Larry is preceded in death by his parents. He is survived by his wife of 44 years, Betty McClellan of Tyler; sons Andrew McClellan and wife Vanessa of Spring, Michael McClellan and wife Pamela of Tyler; stepsons Randy Weaver and wife Jill of Tyler, and Brent Weaver of Burleson; brothers Joe McClellan and wife Barbara of Longview, Lynn McClellan of Tyler, Lyle McClellan and wife Linda of Richardson; grandchildren Kylee, Emma, Maggie, Zachary and Emily McClellan; step granddaughters Chelsea and Haley Weaver, April Shipman and husband Andrew; step great grandsons Carson, Mason, Deklan, and Paxton Shipman. In lieu of flowers, donations may be made to the Alzheimer’s Alliance of Smith County through their website at www.alzalliance.org.

Waymon Larry McClellan, 80, known as Larry, passed away on Saturday, February 20, 2021 at Watkins-Logan Texas State Veterans Home in Tyler due to complications from Alzheimer&#8217;s. He was born August 18, 1940 in Tyler to William Lindsay McClellan... View Obituary & Service Information

The family of Waymon Larry McClellan created this Life Tributes page to make it easy to share your memories.

Waymon Larry McClellan, 80, known as Larry, passed away on Saturday,...

Send flowers to the McClellan family.