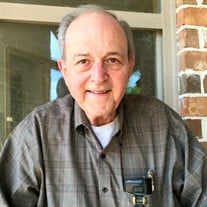 William “Bill” Lynton Long, 80, of Tyler passed away on May 17, 2022. Bill was born February 11, 1942, to Jake Thomas Long and Mildred Nelson Long in Gilmer. His entire childhood was spent in Gilmer where he graduated from Gilmer High School in 1960. After high school, Bill joined the Texas A&M Corps of Cadets, company F-2, where he graduated from Texas A&M in 1964 with a degree in accounting. Bill met the love of his life, Claudia Mullinax Long, on a blind date in 1969 and they were married 3 months later on November 22, 1969. Together, they raised two daughters, Lea and Holly, in Tyler. Bill had a long career as a Certified Public Accountant. He started his career with Squyre’s, Johnson, Squyre’s and then worked 49 years with Henry & Peters, PC. During his time in Tyler, Bill served on many boards and volunteered for many organizations: Tyler Rose Museum (founding board member), Julietta Jarvis Foundation, East Texas A&M Scholarship Fund (Aggie Friday Men’s Group), Jesters, Tyler Cattle Baron’s, Little Wrangers, Tyler Gun Club, and Smith County A&M Club. Bill had many hobbies and interests. He was a hobby jeweler. He loved to hunt, shoot skeet, and working with his dogs to hunt birds. Bill is survived by his daughters, Margaret Lea Holland and husband Brian, Holly Long Burke; grandsons, William Connor Burke and Sean Cody Burke; Everly Grace; niece, Kimberly Long Lewis, numerous cousins, close family, and friends. He is preceded in death by his wife, Claudia Mullinax Long, his parents Jake Thomas Long and Mildred Nelson Long, his brother and sister-in-law, Tom and Pat Long, and his son-in-law, Christopher Michael Burke. Visitation will be held from 5-7 p.m. Thursday, May 19, 2022 with a Celebration of Life service with Masonic Rites on Friday, May 20, 2022 at 2:00 p.m. at Stewart Family Funeral Home in Tyler. In lieu of flowers, memorials may be made to East Texas A&M Scholarship Fund (1268 S Donnybrook Avenue, Tyler, TX 75701) or Hospice of East Texas (4111 University Blvd., Tyler, TX 75701) or a charity of your choice.

William &#8220;Bill&#8221; Lynton Long, 80, of Tyler passed away on May 17, 2022. Bill was born February 11, 1942, to Jake Thomas Long and Mildred Nelson Long in Gilmer. His entire childhood was spent in Gilmer where he graduated from Gilmer... View Obituary & Service Information

The family of William "Bill" L. Long created this Life Tributes page to make it easy to share your memories.

Send flowers to the Long family.