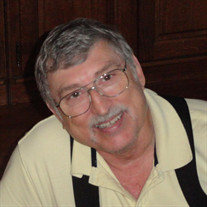 William “Billy, Bill, Dad, Popa” Rather shook off his mortal coil on May 2, 2021. Passing quickly once it was time but hanging on long enough to stick it to the government for one more month. After 74 glorious years of gleefully ringleading numerous schemes, pranks, adventures and outright mischief, he has gifted his outsized laughter to another plane. Here’s hoping that his first partners in crime, brothers Bobby and Ronnie, managed to keep a foot in the pearly gates long enough for him to squeak through, as promised. Billy started this life as the middle son of doting and alternately bemused and terrified parents, Bob and Margie Rather. Always with a plan, usually poorly conceived that ended with one or all of the three brothers injured or in trouble, life was never dull. His mother Margie, whose nervous condition mysteriously cleared up once Bill was grown with a family of his own, never knew when, where or how trouble would come but managed to love him always. From forbidden motorcycles, to frankensteined racers, being chased by the local law (who let’s 14 year olds drive?!?) and on one memorable occasion ending up in a cell for shooting out porch lights with a BB gun from a moving car, his stories were never family friendly and had to be kept from his teenage children and grandchildren so as not to encourage their shenanigans. As Dad kept secrets poorly, joyfully sharing his antics loudly at family dinners, all of them were sure to know by 13 that the bar was low for good behavior. As Bill “matured”, the Army invited him to serve in 1968. Ever the patriot, he respectfully declined by voluntarily joining the Air Force. If the photos his daughters found are to be believed, his entire service in Vietnam was spent taking pictures with any pretty girl that would pose with him. Returning stateside, he realized he had to do something besides raise hell and was accepted to Texas A&M. Relaxing before his semester started, he found himself gallantly perched on a lawn chair in the back of an El Camino on the Pig lot when he met the love of his life. Maybe it was the 70’s ‘stache, maybe the impish good looks, but he managed to convince an otherwise quite smart Teresa “Terri” Langley to go out with him. Proposing after the first week it would be one of the rare times in their 47 year union that he was right since they were perfect for each other. They spent almost 5 decades together, with him being stubbornly ridiculous and having to re-woo her on a regular basis. The multitudes of photos of them kissing and staring into each other’s eyes over their life together prove that they were “stupid” for each other through it all. How she kept falling for him will remain a mystery for the ages. Her infinite patience confirms our opinion of her sainthood. Bill and Terri, an enviable team and unstoppable force, moved constantly with their ever growing tribe Cristy Rather (Emily Feikes, Dallas), Sheri Mendoza (Rafael Mendoza, Norman, OK), Peggy Vollmer (Oscar Vollmer, Flint), William Rather II (Tyler) and Michael Rather (Abby Rather, Marshall). Sharing a love of adventure and a curiosity about the world, they collected chosen family, friends, and mementos from towns and countries around the globe. Bill’s approach to parenting was unconditional love, a blatant flaunting of child labor laws and the expectation that it would all work out ok. Often getting around Terri to get the things he wanted by making them “for the kids”, we found ourselves with dogs, early computers, race tracks, legos, kit clocks and any number of age inappropriate toys. The first to tell you if you screwed up, the first to laugh at you for getting caught, the first to forgive you with a hug when you owned it, and often a glint pride if whatever it was happened to be impressive or clever, Bill was an amazing Dad in every way that mattered. Becoming a Popa to Nathan, Alayna, Jonathan, Eva, Aubrey, Stephen, Oscar, Toni, Eli and Austin only gave him license to up his game and create more creatures of hilarious chaos. His job of having to actually parent completed, he cheerfully took to a general spoiling of them in ways that still became fun and funny life lessons. Feeding the birds, grudgingly feeding the squirrels, loving the dogs, road tripping to national parks, cooking, gardening, building and quoting Popa-isms (no matter how profanity laced or generally inappropriate) gave them all little pieces of him that we will continue to love and be shocked by. Again, the bar is low. We are grateful that we had him and all his lovable curmudgeoning for as long as we did. Dad would want us to mention that he was a Vietnam Veteran, Shriner and Mason that managed to keep a full head of hair and a fabulous mustache until the end. The family invites you to join them for visitation on Friday, May 7 between 6-8pm at Stewart Family Funeral Home, 7525 Old Jacksonville Hwy, Tyler, TX. Graveside services will be held at the Scottsville Cemetery on Saturday, May 8 at 11am. The Scottsville Cemetery is located at 32°32'10"N 94°14'30"W (32.536098, -94.241611) Intersection of Farm Roads 1998 and 2199 5 miles East of Marshall - 11 miles West of Waskom We will expect all the good stories (even those at his expense) that would have made him laughingly tell us all to “piss off” to be shared. Nothing too formal. T-Shirts with Aggie, Disney, Star Wars, Star Trek or Hawaiian shirts are encouraged. Forget the flowers as Dad was more of a plant guy. Forget the plants as Mom will kill them. If you feel the need to do something, please send a donation to The Hospice of East Texas, 4111 University Blvd., Tyler, TX 75701. The amazing staff there took great care of Dad and Mom in his final days.

William &#8220;Billy, Bill, Dad, Popa&#8221; Rather shook off his mortal coil on May 2, 2021. Passing quickly once it was time but hanging on long enough to stick it to the government for one more month. After 74 glorious years of gleefully... View Obituary & Service Information

The family of William "Bill" Rather created this Life Tributes page to make it easy to share your memories.

William “Billy, Bill, Dad, Popa” Rather shook off his mortal...