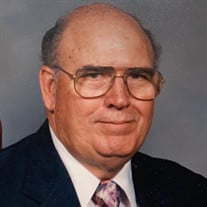 A graveside service for William “Bill” Charles Stephenson, age 89, of Whitehouse will be held on Monday, December 23, 2019 at 2:00 p.m. at Union Chapel Cemetery in Van, Texas with Dr. Charles Dodson officiating under the direction of Stewart Family Funeral Home. Mr. Stephenson died on Thursday, December 19, 2019 in Whitehouse. He was born to Mr. Elton Stephenson Sr. and Mrs. Pauline Stephenson of Corsicana. He grew up in Tyler, graduated from Tyler High School in 1948 and received degrees from Tyler Jr. College, University of Chicago and the University of Texas. Bill served in the Navy on the LST-1101 in the Korean War from 1950-1953, where he was highly decorated. He was employed for 15 years with Nipak Inc. in Kerens, TX and for 23 years as the Owner and President of a petroleum laboratory business from which he retired. Bill was preceded in death by his wife of 63 years, Wanda Davis Stephenson. He is survived by his children, Matt and Lori Stephenson of Tomball, Texas, Chuck and Tammy Stephenson of Bullard, and Andi Clark of Whitehouse; five grandchildren, Michelle Dotson and Bryan Stephenson of Bullard, and Mitchell, Matti, and Cade Stephenson of Tomball. Bill is also survived by brothers and sisters-in-law, John and Linda Stephenson, Ken and Walliece Stephenson, Shirlene Hanson, and brother-in-law and sister-in-law, Earl and Merry Jayne Davis, as well as numerous nieces, nephews, and friends. Bill was a charter member of The Woods Baptist Church. Instead of the usual floral tributes the family requests memorials be made to the Green Acres Baptist Missions Fund, 1505 Troup Hwy., Tyler, TX 75701.

A graveside service for William &#8220;Bill&#8221; Charles Stephenson, age 89, of Whitehouse will be held on Monday, December 23, 2019 at 2:00 p.m. at Union Chapel Cemetery in Van, Texas with Dr. Charles Dodson officiating under the direction... View Obituary & Service Information

The family of William "Bill" Charles Stephenson created this Life Tributes page to make it easy to share your memories.

Send flowers to the Stephenson family.