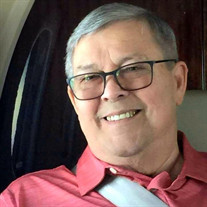 Services for William Charles Bliss, 76, of Tyler, TX will be held on Saturday, December 11, 2021 at 2:30 p.m. at Stewart Family Funeral Home Chapel, 7525 Old Jacksonville Highway in Tyler, with The Very Reverend Hank Lanik officiating. A loving husband, son, father, grandfather, and uncle, William Charles “Bill” Bliss passed away peacefully surrounded by family on Sunday, November 7, 2021 in Tyler. Bill was the youngest son of Charles M. and Evelyn Davis Bliss, born February 20, 1945 in Elyria, OH. A graduate of Elyria Catholic High School in 1963, Bill was drafted in 1968 and served in the 1st Battalion, 77th Artillery of the 1st Cavalry Division (Airmobile) in the Republic of Vietnam in 1969, where he was decorated for his heroism and achievement. In addition to the Purple Heart for wounds suffered in combat, Bill was awarded the Bronze Star, Army Commendation Medal (for Heroism), and Air Medal among other commendations. He later graduated from Officer Candidate School and continued to serve in the U.S. Army Reserve until his retirement at the rank of Major. Bill received his Associate’s Degree in Plumbing and Pipe Fitting from Oklahoma State University’s Institute of Technology in Okmulgee, OK. A Master Plumber, Bill worked 17 years at OSU-IT where he taught welding, plumbing, and pipe fitting and served as the head of the Plumbing program and assistant department head for Construction Technology education. Bill later joined Tyler Pipe in Tyler, TX where over a long career Bill held a number of sales and management positions, including Regional Sales Manager, National Sales Manager in both the Utility Division and Soil Pipe Divisions, Vice President for Sales and Marketing, and most recently as Vice President of the McWane Plumbing Group. Bill’s experience and expertise was widely regarded as he held a number of leadership positions in a variety of industry associations and groups, both in the US and Canada. A member of the Cast Iron Soil Pipe Institute’s (CISPI) Technical Committee since 1987, Bill was also a past CISPI President. He was actively involved with ASTM International as a member on various committees since 1987, including terms as Committee Chairman and Membership Chairman. Bill also contributed his knowledge to other groups, including the American Society of Mechanical Engineers (ASME), the American Water Works Association, and the Canadian Standards Association. Bill was also a longtime member of the Knights of Columbus, Veterans of Foreign Wars, and the American Legion. Bill was preceded in death by his grandparents, Charles and Fredaline Thompson Bliss of Norwalk, OH and Arthur and Ida Ufheil Davis of Elyria; parents Charles and Evelyn Davis Bliss of Elyria; brother Richard Bliss of Elyria; aunts Bernice Bliss of Norwalk, Dorothy Bliss Surman of Los Angeles, CA, Lucille Davis West of Elyria, and Fredaline Bliss Strand McDonald of Belleview, WA; and his cousin Fred Wigginton of Lorain, OH. Bill is survived by his wife of 33 years, Judy Dillon Bliss of Tyler; children William Bliss Jr. of Plano, TX, Justin Thomas of Tyler, Michael Bliss and wife Phithaya of San Angelo, TX, Megan Thomas Biscomb and her husband Chris of Tyler, and Rebecca Bliss Hall and her husband Kyle of Fort Worth, TX; grandchildren Brody Gibbs and his wife Dakota of Allen, TX, Hayden Gibbs of Plano, Avery Biscomb of Tyler, Blake Thomas of Tyler, Kelsey Khouphongsy of Fort Worth, Claire Thomas of Tyler, Jacob Bliss Hall of Fort Worth, Victoria Hall of Lubbock, TX, William Chase Biscomb of Tyler, Ella Thomas of Tyler, Rylan Bliss of San Angelo, and Alanna Bliss of San Angelo; cousins Sally Amabile and her husband John of Grandview, TX and Dorothy Strand of Seattle, WA. Bill is also survived by his cousin Stephen Braegger and his wife Deborah of Grafton, OH and life-long friend William LaFrancois of Henryetta, OK, each of whom Bill regarded as a brother. Honorary pallbearers will be Brody Gibbs, Hayden Gibbs, Avery Biscomb, Blake Thomas, Jacob Hall, William Chase Biscomb, and Rylan Bliss. Visitation is scheduled immediately prior to the service from 1:30 – 2:30 p.m. on Saturday, December 11, 2021 at Stewart Family Funeral Home, 7525 Old Jacksonville Highway in Tyler. Interment is planned during a private ceremony at Rose Lawn Cemetery in Tyler. If desired, memorials may be made to Catholic Charities – Diocese of Tyler (https://ccetx.org/donate) or the Wounded Warrior Project (https://support.woundedwarriorproject.org/donate).

The family of William Charles Bliss created this Life Tributes page to make it easy to share your memories.

Services for William Charles Bliss, 76, of Tyler, TX will be...

Send flowers to the Bliss family.