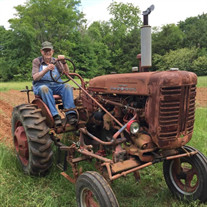 William Howell Freeman departed for his heavenly home on November 2, 2021. Willie was born April 25, 1936 in Smith County, Texas to Baxter and Anice Freeman. He graduated from Van High School in 1953 and moved to Tyler. He married Faye Sanders on June 14, 1955. Willie was baptized into the Lord’s church in November of 1955 and was a faithful member of Shiloh Road Church of Christ at the time of his passing. He was one of the original elders of the Shiloh Road congregation. Over the years, he taught youth and college classes and worked with the prison ministry. He was also very involved with the Boy Scouts. He worked at National Homes for 19 years and retired from Carrier Air Conditioning Corp after 25 years. Willie enjoyed gardening and growing things and greatly enjoyed his tractors. His greatest joy was his family. He loved spending time with his kids, grandkids, and all of the great-grandkids. He was also a blood donor and had received recognition for donating over 20 gallons of blood. Willie was preceded in death by his parents, his sister and brother-in-law, Joy and JW Page, his daughter, Nona Christian, and his great-granddaughter, Alexis Prince. He is survived by his wife Faye and his children and their spouses, Denise and Brian Cervantes, Dean and Sherry Freeman, Brian and Shauna Freeman, and Lisa and Stephen Hall. He is also survived by his grandchildren and spouses, Michael and Rachel Prince, Kathi Prince, Chris and Holli Sadler. Charles and Shanna Sadler, Justin Freeman, Michelle Crane, Kayla and Baylen Lee, Dylan and Kayloni Freeman, Matthew Hall, Derek Hall, and Misty Hall. He is also survived by 20 great-grandchildren and one great-great-grandchild. Willie also leaves behind two nephews, Charles Page and Joel Page, and their families. Pallbearers will be the grandsons. Family visitation will be held Friday, November 5 at Stewart Funeral Home. Funeral Services will be at Shiloh Road Church of Christ, 1801 Shiloh Road, at 2:00 Saturday, November 6, with interment to follow at Cathedral in the Pines. Memorial contributions may be made to Eastern European Mission, P. O. Box 55245, Hurst, TX 76054 or (www.eem.org).

William Howell Freeman departed for his heavenly home on November 2, 2021. Willie was born April 25, 1936 in Smith County, Texas to Baxter and Anice Freeman. He graduated from Van High School in 1953 and moved to Tyler. He married Faye Sanders... View Obituary & Service Information

The family of William Howell Freeman created this Life Tributes page to make it easy to share your memories.

William Howell Freeman departed for his heavenly home on November...

Send flowers to the Freeman family.