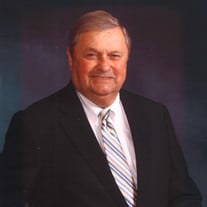 A celebration of life for William Joseph Davis “Joe” Norton, 83, of Tyler will be held on Thursday, January 16, 2020 from 4:00 to 6:00 p.m. at Willow Brook Country Club in Tyler. There will be a private family service at Christ Episcopal Church of Tyler. Joe passed away Wednesday, January 8, 2020 in Tyler. He was born July 24, 1936 in Terrell to Thomas Edward Norton and Helen Claire Davis Norton. Joe graduated from Terrell High School and attended East Texas State University where he played football. After college, he served in the U.S. Army where he was stationed in Japan. Joe owned Norton Equipment Co. and was a general partner in Norton Leasing Ltd., LLP. He served as president and was a principal shareholder of Norton Companies of Texas, Inc. for 25 years, until 1989. He also owned W.D. Norton, Inc., doing business as Overhead Door of Tyler/Longview/Mt. Pleasant, for 16 years, until 2005. Joe is past vice chairman of the Board of Regents, East Texas State University and served as vice president of development on the Board of Trustees for All Saints Episcopal School of Tyler. Joe was vice chairman of Southside Bancshares, Inc. Board of Directors from May 2014 to December 2014 and was elected chairman of Southside Bancshares, Inc. in January 2015 until his retirement in 2018. He served on the Board of Directors of Southside Bancshares, Inc. since 1988 and Southside Bank since 1977. Joe served as President of the Tyler Rose Festival and Willow Brook Country Club. Joe was also very active in his church. Joe was an avid sportsman and he loved to travel. He loved to fly and would pilot his own plane. Flying was his passion. He could relax and not think of anything, but flying. Joe also loved his 4 legged friends. Joe was preceded in death by his mother, father, brother, sister and daughter. He is survived by his loving family including his wife of 55 years, Jan; brother Tom and wife Linda; daughters Day Norton and Debbie Norton; granddaughter Meredith Norton Douglas and husband Tyler; grandson William (Drew) Jackson; as well as many other loving family, friends and employees. In lieu of flowers, memorials may be made to the Hospice of East Texas Foundation, 4111 University Blvd., Tyler, TX 75701; Christ Episcopal Church, 118 S Bois d’Arc, Tyler, TX 75702; and All Saints Episcopal School, 2695 S SW Loop 323, Tyler, TX 75701. Joe was loved by all and will be greatly missed.

The family of William Joseph D. "Joe" Norton created this Life Tributes page to make it easy to share your memories.

A celebration of life for William Joseph Davis “Joe” Norton,...

Send flowers to the Norton family.